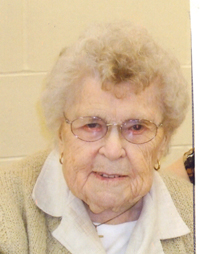 She was born March 2, 1910, to Arthur and Lilly (Strand) Tukua in Freeborn County. She was baptized and confirmed at West Freeborn Church of Freeborn.

Ollie grew up helping her dad outside on the farm. She attended District 21 School in Freeborn where she played basketball. She completed one year of teachers training at Moorhead College and taught country school near Pelican Rapids. While teaching she met her husband Edward. Edward and Ollie were married 70 1/2 years. Edward died March 2, 2001, on her birthday.

Ollie was employed by S.S. Kressge, currently Kmart, as a bookkeeper. Ollie enjoyed flowers, gardening and going to auctions. Her hobbies included tatting, starting at age 5, crocheting, counted cross stitch, quilting and hardanger, a Norwegian stitchery. She lived in her own home reaching the age of 100. She entered Prairie Manor on April 27, 2010.

Funeral services will be held at 2 p.m. Friday at St. Olaf Lutheran Church with the Rev. Ron Barnett officiating. Visitation will be for one hour before the service. Clasen-Jordan Mortuary is in charge of arrangements.