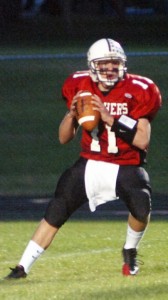 NEW RICHLAND- The New Richland-Hartland-Ellendale Geneva football team knew coming into Friday night they would have to play their best game of the season to compete against Waterville-Elysian-Morristown, the No. 1 team in Class 2A.

The Buccaneers, however, didn’t give the Panthers a chance as W-E-M had 502 yards of total offense and had six rushing touchdowns to cruise past NRHEG 46-6.

“We played poorly tonight and W-E-M played very well,” NRHEG head coach Dan Stork said. “They are No. 1 for a reason. Defensively, they simply over powered us and mixed up their fronts and coverages constantly, which really gave us fits.”

After intercepting a Sam Lundberg pass two plays into the game, W-E-M’s Blake Boran scored from six yards out to give the Buccaneers a 7-0 lead.

W-E-M struck again later in the first quarter, when quarterback Conrad Masberg cruised 35 yards for a touchdown to give the Buccaneers a 14-0 lead.

In the second quarter, W-E-M got two rushing touchdowns from Boran to push the lead up to 28-0 at halftime.

W-E-M then put the game away for good in the third as Brady Ayers scored two rushing touchdowns and the Buccaneers forced a safety and got a field goal to extend the lead to 46-0.

The Panthers got on the board in the fourth quarter when Sam Lundberg found running-back Geoff Ramaker for a 16 yard pass to make the score 46-6.

The Panthers struggled to find any rhythm on offense all night as they were hounded by the W-E-M defense.

The Buccaneer defense held the Panthers to 133 yards of total offense and allowed only six rushing yards all night.

The Panthers also turned the ball over five times as they had three interceptions and two fumbles.

“We had some bad breaks with tipped balls being picked and committing penalties that put us in third and long allowing them to tee off with their backers,” Stork said. “Their offense just kept pounding us with their run game which only opened the skys for them.”

Even with the loss, Stork says it’s important for the team to come back next week and be ready for a home game against Maple River.

“We need to put this behind us and come out next week focused and have some quality practices to try and beat a good Maple River team.” Stork said.