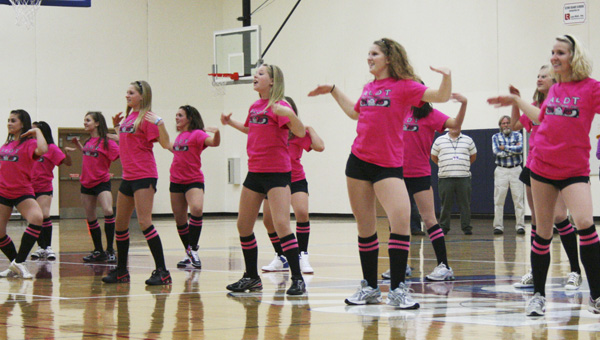 The Albert Lea Dance Team performed for the school during the pep rally Wednesday. Students from all grades at the high school attended the rally to show school spirit during Homecoming Week. -- Kelli Lageson/Albert Lea Tribune

Lots of school spirit was seen and heard at a pep rally Wednesday morning at Albert Lea High School. It was just one of the many activities being celebrated for Homecoming Week. 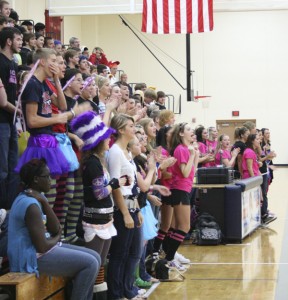 Students sing along to the school song during a pep fest Wednesday morning at Albert Lea High School. The wacky clothes they’re wearing are for the “Wacky Wednesday” theme. -- Kelli Lageson/Albert Lea Tribune

The entire high school attended the rally during their advisement period a little before 10 a.m. After the pep band played the school song, students heard from the captains of all the fall sports teams.

Captains from volleyball, boys’ and girls’ cross country, boys’ and girls’ soccer, girls’ tennis and football spoke in front of their fellow students. Each group of captains spoke about how their teams were doing and the upcoming games.

The captains of Albert Lea’s football team (1-4, 0-4 Big Nine) reminded the school that the Homecoming football game is Friday night against No. 2 Mankato West at 7 p.m. at Hammer Field.

“This was one of the best pep fests we’ve had in a while,” ALHS Principal Al Root said.

He also said the school is focusing on school spirit and trying to get people excited for school sport teams. Root also wanted to remind students to be safe and smart this weekend.

“We want to have Homecoming be safe for the students and have a positive energy this weekend,” Root said.

Wednesday evening also had a dinner and dance for the senior class. Today there will be another seniors-only event during their seventh hour class time where the Homecoming court will race homemade boats in the pool. On Monday evening at the high school Silas Randall and Kayla Swee were crowned Homecoming royalty.

Friday the school will have a condensed schedule with the entire afternoon devoted to a field day at Hammer Field. There will be lots of events like a dunk tank and powderpuff football. Friday evening after the football game there will be a dance at the high school around 9 p.m.