Puffballs are round with short root-like fungal fibers

“Everything is nearly copacetic. Pop called and sang “Happy Birthday” to me. It’s not my birthday but things could be worse. I could be a horse and have my shoes nailed to my feet.”

“Did you tell him that it’s not your birthday?” I say.

“No, as bad a singer as he is, he needs all the practice he can get. Ma put a photo of a bikini-clad beauty on the refrigerator door to act as an incentive for her to lose a few pounds.”

“She’s lost a pound but Pop has put on 12 pounds. Pop is tighter than a middle sardine, but I convinced him to buy a couple of lottery tickets. He bought two to double his chance of losing. He is as tight as the pupils on a cross-eyed flea. He likes being cheap because it doesn’t cost much. He won a nice little pile of money on the first ticket. He was so poor as a young man, that to rub two pennies together, he had to borrow one. I thought he’d be thrilled with his win, but he wasn’t happy.”

“What was wrong?” I wonder aloud.

“Oh, he was mad that he had bought the second ticket.”

I was at a tonsorial emporium. As I was being sheared, a hummingbird flew to the window of the barbershop and checked out the barber pole. The red of that pole attracted the tiny bird.

The blue jays were kicking up a fuss in the yard. An accipiter flew through. It looked like a sharp-shinned hawk. The blustery blue jays took shelter, hunkering down in silence. The feeders were deserted. The yard was quiet. The first bird to fly back to a feeder was a black-capped chickadee. It sang “chick-a-dee-dee-dee-dee-dee.” The number of dees indicating an alert.

The giant puffball is a whitish globe as large as a beach ball, with short, root-like fungal fibers connecting it to the ground. The puffball looks like it is made of Styrofoam. Puffballs eventually dry and split, releasing their spores into the air. Anyone who has stepped on a dried puffball is familiar with the puff of spores emanating from the puffball like smoke.

A couple of friends of mine, Mike Link and Kate Crowley of Willow River, walked 1,540 miles around Lake Superior. That’s like walking the road from Minneapolis to Monterrey, Mexico. Lake Superior holds one-tenth of all surface freshwater in the world. In a 4 1/2-month expedition across three states and a Canadian province, Mike (age 64) and Kate (age 60) hiked as close to the shoreline of the lake as possible. Mike lost 30 pounds during the walk and faces the likelihood of two knee replacements.

“How high do hummingbirds fly?” When migrating, hummingbirds generally do not fly very high. They tend to cruise just above treetop level or slightly above the top of waterways. They do not flock. Migration is an individual endeavor for a hummingbird.

“Do dragonflies bite?” They do bite other flying insects but I have not known of any human being bitten by a dragonfly.

“Where do ruby-throated hummingbirds spend the winter?” They migrate to Central America — from Mexico to Panama.

“Won’t birds freeze if I provide water during the winter?” Native birds know when it is safe to bathe. European starlings and house sparrows are not native and have not learned when baths are appropriate. They take dips in the severe cold. The starlings do not always fare well.

“Do blue jays migrate?” Some do and some don’t. We have blue jays here all year but they are not necessarily the same birds. The jays here in the summer could migrate south for the winter and be replaced by blue jays coming from the north. The jays move just far enough to find conditions more to their liking. 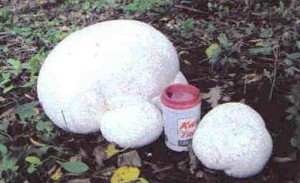 Photo of puffballs by Danny Tuttle of Twin Lakes.

NOAA’s National Climate Extremes Committee declared a hailstone that fell on July 23, 2010, in Vivian, S.D., to be the largest in diameter and the heaviest ever recovered in the United States. The hailstone was 8 inches in diameter, weighed 1 pound, 15 ounces, and had a circumference of 18.62 inches.

Cuckoos inhabit wooded areas throughout the eastern part of the United States. Some folks call them rain crows because of their habit of singing before thunderstorms. The black-billed cuckoo calls, “cu-cu-cu, cu-cu-cu.” Yellow-billed cuckoos call, “kow, kow, kow, kowlp, kowlp.”

The Migratory Bird Conservation Commission approved more than $21 million in land acquisitions in 12 different National Wildlife Refuges. The projects are supported by the Migratory Bird Conservation Fund, which includes proceeds from duck stamp sales. This will add an estimated 12,000 acres of waterfowl habitat to the National Wildlife Refuge System.

Folklore says that the first trackable snowfall will occur 6 weeks after the appearance of the snowbird (junco). I saw the first junco in my yard on Sept. 26.

In early fall, adult wild animals move about searching for places to spend the winter. Take a count of the roadkill you see on a drive one day. The number will amaze you. Deer, raccoon, opossum, foxes, squirrels and skunks line our roads. I think skunks might have a sense of invulnerability because of their powerful spray and don’t pay much attention to cars. Automobiles are to skunks what Kryptonite is to Superman and they will be until a car manufacturer produces a model named the Smeller that has a nose for a hood ornament and will be able to detect scents.

A meeting will be held Oct. 7 at 7 p.m. at the Episcopal Church. Barry Christianson presents Midway — Seasons of the Albatross, an amazing story of the Midway Atoll National Wildlife Refuge. No charge.

“Happiness is a thing to be practiced, like the violin.” — John Lubbock

“I think that I shall never see a poem lovely as a tree. A tree whose hungry mouth is prest against the earth’s sweet flowing breast;  a tree that looks at God all day, and lifts her leafy arms to pray; a tree that may in summer wear a nest of robins in her hair; upon whose bosom snow has lain; who intimately lives with rain. Poems are made by fools like me, but only God can make a tree.” — Joyce Kilmer