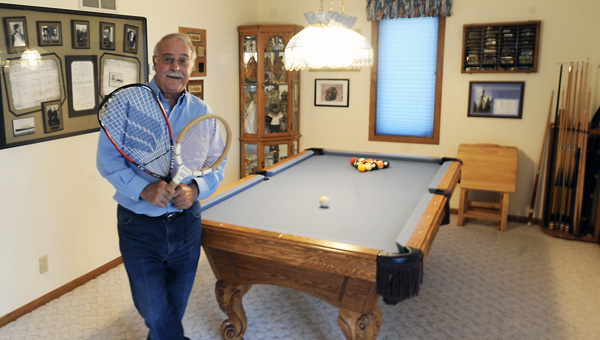 Milt Ost holds two rackets next to the pool table in his house. The racket on the left is the one he currently uses, and the one on the right is the racket he used 45 years ago. -- Andrew Dyrdal/Albert Lea Tribune

Albert Lean Milt Ost has been a part of a lot of big events.

The retired pastor gave a speech at Madison Square Garden in New York City 50 years ago at a Lutheran convention and carried the Olympic torch during the 1996 Summer Olympics. 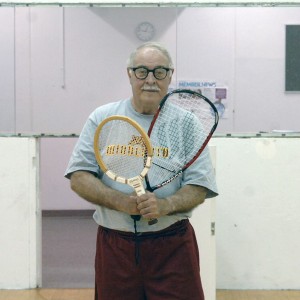 Milt Ost stands in a raquetball court at the Albert Lea Family Y this fall. He plays at the Y three days a week at noon. -- Andrew Dyrdal/Albert Lea Tribune

But not far from that same torch, which now rests atop a mantle in his living room, is his gym bag, full of racquetballs and extra pairs of socks — little things that are a part of one of the biggest things in his life.

Ost began playing racquetball in 1965 when he was 30 years old.

He pastored at Atonement Lutheran in Jamestown, N.D., and started playing at Jamestown College for the exercise and because he knew guys who played.

The college had one court four feet underground. Ost and the other players would jump down before they would play and climb back out when they were finished.

“If it were that way now I wouldn’t be able to get out,” said Ost, laughing outside the courts at the of Albert Lea Family Y.

But those courts weren’t the worst he ever played on.

In 1971 Ost moved to Albert Lea with his wife, Delores, and three grade-school daughters. He took a job as the youth pastor at Grace Lutheran Church and was one of the first players to begin playing at the Family Y on West Main St. 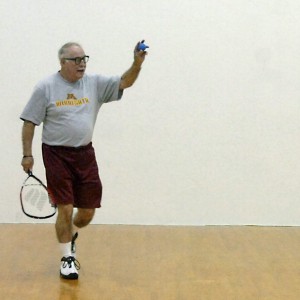 During a racquetball game with his buddies, Milt Ost holds up the ball while walking back to the service line. -- Andrew Dyrdal/Albert Lea Tribune

That was the worst court he ever played on.

In the Y’s basement, in the space that is now the weight room, Ost joined others as they placed beams against a bare cement wall and taped a racquetball court’s dimensions on the floor. There were no ceiling shots and there weren’t any walls, but it was the only court in Albert Lea so Ost made the most of it.

“Sometimes the ball hit good,” Ost said. “But sometimes it squirted off in different directions.”

Occasionally, though, Ost would join a friend and travel to Mankato, Rochester or Mason City to play on the nearest real court.

During the early 70s, while Ost was playing on a poor court, upgrades in racquetball equipment were changing the game. Aluminum was used in racket construction, replacing laminated wood, and Ost began wearing safety glasses.

“There didn’t seem to be a need for them,” said Ost, of safety goggles. “Nobody ever got hurt so we figured it wasn’t a big deal.”

But safety became a big deal. Soon after rackets became larger and lighter, new balls were introduced that were no longer made from heavy black rubber. Ost said the new blue balls were five times faster than the old ones.

Now, two weeks away from his 75th birthday, Ost still plays three times a week at the Family Y at noon. He hasn’t played in the Minnesota State Tournament in Minneapolis since 1990 but hopes to this year — in the 75 and older division.

Besides racquetball, Ost plays pools with his Delores in their home. He also is a substitute pastor at churches around the area.

Interesting fact: He carried the torch during the 1996 Atlantic Summer Olympics.