Raising hogs is about people 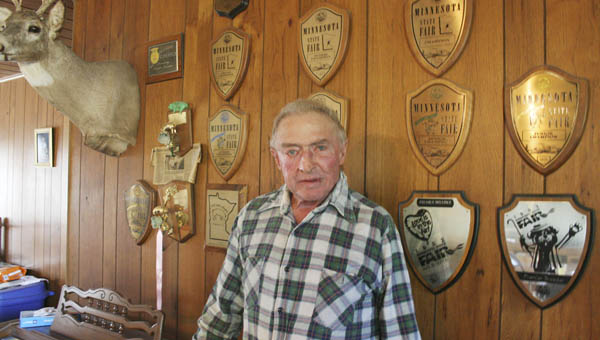 Robert Bryson stands in front of his wall of plaques, marking awards he won showing livestock at the Minnesota State Fair over the past 57 years. -- Michelle Haacke/Albert Lea Tribune

ALDEN — Robert Bryson of rural Alden has won so many awards showing livestock at the Minnesota State Fair, he’s lost track of how many he’s received.

“I’ve been at it since 1953. That was my first year,” Bryson recalled. “We started with purebred hogs we showed at the Freeborn County Fair.”

He’s shown livestock — mostly hogs, with a few cattle along the way — for 57 years straight at the state fair.

A humble man, Bryson won’t take any credit for his successes alone. 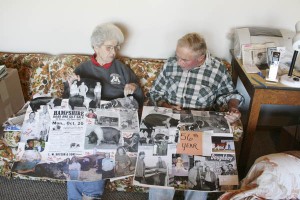 He remembers one year when his daughters, Nora and Heidi, were elementary-school age during state fair time. An illness in the family kept Bryson close to home for a good chunk of the fair, so his friend Bob Jacobs tended to the girls up at the fair, and the girls helped show the hogs that year.

“That’s how you get 57 years in,” Bryson said. “People helped me at times along the way.”

Born and raised in rural Alden, Bryson graduated from Alden High School in 1946 and joined his father, L.W. Bryson in the family business of raising purebred hogs and selling them.

“My dad raised purebred Durocs and put the hogs on a train from Alden to Albert Lea,” he said.

Bryson grew the business to purebred gilts and sows, which he sold at shows and to people all around the country, and beyond.

“I’ve shipped sows to eight or nine states, a pen of pigs to Mexico, a few sows to France and pigs to Japan over the years,” he said.

“Now I raise Hampshires,” he continued. “I took on Durocs and Yorks for a while, but it got to be too much trouble having separate pens for all the breeds.”

He showed his livestock at all kinds of shows aside from the state fair, including the Freeborn County Fair and the Ak-Sar-Ben 4-H Stock Show, and even helped bring a national swine conference to Albert Lea back in the early 1970s.

“We filled every hotel around — in Albert Lea and Glenville. There were so many people, people had to go to Austin for a hotel,” he said.

Bryson’s wife, Delores, remembers all of the sow and gilt shows they use to have, adding that over the years they held more than 20 purebred sow sales.

“One time, back when we served meals to everyone at the show before the sale started, we served over 300 meals,” she smiled.

In addition, Bryson also found time to serve the community over the years. He’s currently a member of the Albert Lea Lions Club, spent 19 years as the president of the Freeborn County Farm Bureau and served on the Alden school board. Two of his proudest moments were handing diplomas to Nora and Heidi as they walked across the stage at their high school graduations.

When Bryson looks back, what comes to mind first is not the boxes full of awards, trophies or newspaper clippings he’s collected over the decades. While he’s proud of his wall of plaques, he said it’s all about the people these experiences allowed him to meet over the years.

It makes him smile when he talks about Don Yuston and Walt Briggs, who time and time again helped him out as field men. He remembers Wally Nelson, who purchased a boar from Bryson that went on to win grand champion at the Minnesota State Fair.

It also makes him sad.

“So many of these people are gone now,” he reflected.

However, hardly a day goes by that he doesn’t run into an old friend, or someone who bought livestock from him over the years.

“Delores and I like to go out for breakfast,” he said. “Very seldom do we sit down for breakfast, whether it’s here, or 20 miles from here, or even in Rochester, where somebody doesn’t come along saying they bought sows from us over the years.”

Interesting fact: Robert played for the Alden High School football team, which went undefeated his junior year of high school, in the fall of 1944.