Funeral services for Ralph Dale Coppock, 82, of Hartland will be held at 11 a.m. Wednesday at Cross of Glory Lutheran Church. The Rev. Dennis Frank will officiate. Interment will be at the Hartland Cemetery with military honors accorded by Freeborn County area veteran’s organizations. Visitation will be from 4 to 6 p.m. today at Bayview/Freeborn Funeral Home and one hour prior to the service at the church. To sign the guest book, go to www.bayviewfuneral.com. 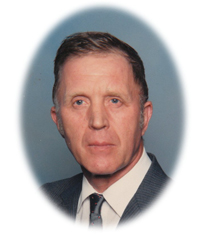 Ralph Dale Coppock was born on Oct. 12, 1928, to Glenn and Helen (Keyes) Coppock in Laurens, Iowa. He attended Pickerel Lake grade school in Marathon, Iowa, and graduated from Marathon High School in 1946. Ralph was very active in school, participating in football, track and plays. Ralph worked on the family farm and was a hired man for the neighbors. He was also employed at Thiemans & Superior Mfg. Co. in Albert City, Iowa. In October of 1950 Ralph entered the United States Air Force where he was stationed at Orly Field in Paris, France, for three years. After his discharge, Ralph attended Austin Vocational School. On Jan. 20, 1957, he was united in marriage to Doris Thofson at the Hayward Lutheran Church in Hayward. To this union four children were born: Julie, Cheryl, David and Shannon. Ralph worked at Hemenway Concrete Products and Scotsman Ice Systems for 30 years. In retirement, he worked at County Market for nine years.

Ralph was an active member of Cross of Glory Lutheran Church where he served as a trustee. He was also a member of the Hartland American Legion Post 266. Ralph enjoyed going for walks, bike riding, parades and had a special interests in trains, the history of steam engines and antique farm machinery. He was a devoted loving husband, father and grandfather and enjoyed the time spent with his family.

Ralph was preceded in death by his parents; and sister, Ardus Andersen.