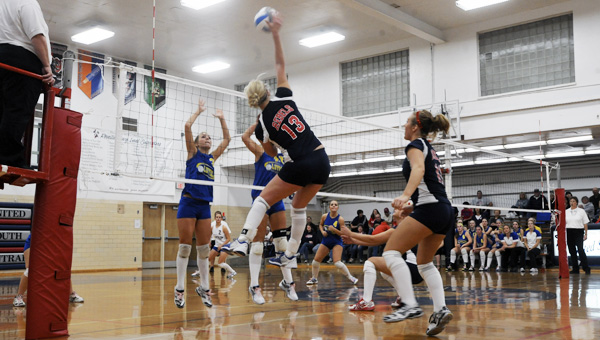 Kayla Stenzel spikes the ball over Mankato Loyola would be blockers Monday in Wells. -- Andrew Dyrdal

WELLS — Kayla Stenzel had 10 kills Monday and the United South Central Rebels volleyball team kept the Mankato Loyola Crusaders chasing the ball all match in a 3-0 win in the first round of the Section 2A tournament.

“It was a good match to win,” USC head coach Jolene Bute said. “But it’s time to move on.”

After cruising through the first set, the Rebels led the Crusaders 11-1 to open the second, punctuated by kills from Val Sahr and Stenzel.

“Stenzel hit the ball well,” Bute said. “She hit the ball hard, but I don’t think anybody stood out. We just got the job done.”

The Crusaders played scrappy all match, digging many ball of their knees, but the Rebels won the third set 25-20 to advance to the second round.

Marielle Schultz led the Rebels in serving, going 17-for-17 with 20 set assists. Erinn Hotzler was also perfect from the service line, going 8-for-8.

Allie Voigt had a team-high six ace blocks to go along with five kills.

Danielle Koestler was second on the team with six kills.

The Rebels play the No. 4 Springfield Tigers (19-8, 0-0) in the second round of the Section 2A tournament at 7 p.m. Thursday in Springfield.

“We don’t a lot about Springfield,” Bute said. “Hopefully by (today) we will. It’s going to be a tougher match.”