Funeral services for Richard Claire Grove, age 83, of Albert Lea, will be held at 11 a.m. Monday, Oct. 18, 2010, at Assemblies of God Church. The Rev. Lee Freshour will officiate. Interment will be at the Hillcrest Cemetery. Visitation will be from 5 to 7 p.m. Sunday, Oct. 17, at Bayview/Freeborn Funeral Home and one hour prior to the service at the church. To sign the guest book, go to www.bayviewfuneral.com. 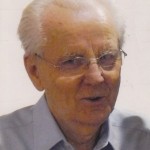 Richard Claire Grove was born on June 21, 1927, to Ira and Charlotte (Peterson) Grove in Albert Lea. He grew up in Albert Lea and attended Albert Lea schools. Richard was united in marriage to Shirley Toupal on April 14, 1956, in Albert Lea. He served his basic training in the U.S. Navy in San Francisco. After his discharge, Richard returned to Albert Lea and worked at Johnson’s Furs and then Wilson & Co. until his retirement in 1989. He loved fishing and taking care of his home. Richard enjoyed spending time with his grandchildren and loved traveling with his family, especially the annual trips to the Boundary Waters. He also loved all aspects of baseball, coaching, playing and watching the Twins. He will be deeply missed by his family and friends.

Richard was preceded in death by his parents; wife, Shirley; sister Beverly; and brother Robert.