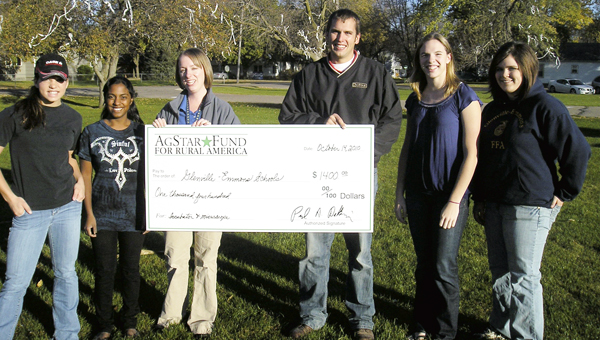 Some of the schools in rural Freeborn County will soon have some updated equipment thanks to grant funding from AgStar Financial Services’ Fund for Rural America.

Angie James, agriculture instructor at G-E, applied for a grant and received $1,400. James plans to buy seven new microscopes and an incubator for the science lab.

“The incubator is to grow microbes,” James said. “We’ve never had one before.”

James said she had been using plastic containers as incubators previously. The $1,400 grant is double the yearly science budget at G-E, so it will replace older equipment that instructors wouldn’t have been able to replace with their budget.

“This was a much-needed grant,” James said.

James said she had watched her students struggle while using the older equipment, and she’s excited to have newer, working microscopes. Other things she’d like to acquire someday are a hotwater bath or a digital scale.

NRHEG High School received a $2,500 grant after Dan Sorum, an agriculture instructor, applied. He plans to purchase an aquaculture system for fish farming.

“We’ll use it in my animal science class,” Sorum said.

He said he planned to have all ages use it and learn from it. As the FFA adviser he hoped that some FFA members might benefit from it as well.

“We want to keep it working all year round if we can,” Sorum said. “It’s nice that AgStar does this — with school budgets the way that they are this is irreplaceable.”

He said there’s no way the school would have been able to get this equipment without the grant.

USC High School will use its funds to purchase equipment for the agriculture mechanics laboratory. They have a few classes that teach students metal design and fabrication.

AgStar’s Fund for Rural America is a corporate giving program of AgStar Financial Services. This year the fund awarded more than $36,000 to 17 high schools in Minnesota and Wisconsin. The program’s mission is to support agriculture education by funding course work relevant to agriculture. Since its inception in 2001, the fund has donated more than $3 million to organizations working to improve the future of rural America. The fund focuses on one of the four key areas of support, which include education, technology, environment and quality of life.