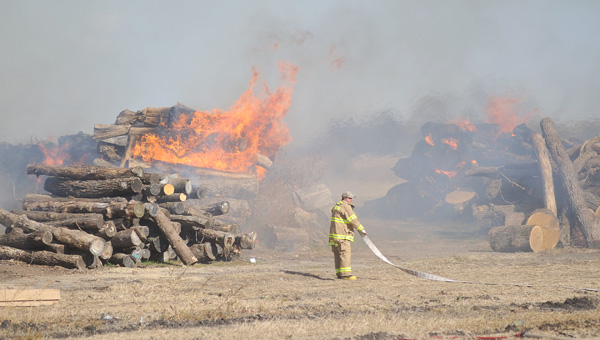 Firefighters from 13 Freeborn County fire departments battled a blaze Wednesday afternoon north of Oakland after a sawmill shed caught fire and spread in heavy wind to large piles of logs and cut lumber.

The sawmill, at Len’s Wood Products, 22726 890th Ave., is three-fourths of a mile north of Oakland. It is owned by Len and Barb Meyer and has been in operation at least 15 years.

Doug Johnson, investigator with the Freeborn County Fire Investigation Team, estimated at least $500,000 in damages. The sawmill shed is a total loss, and a couple of the other buildings on the property also received damages. The amount of wood lost in the blaze has not been determined.

The Meyer’s house and barn, just feet in front of the area of the blaze, did not appear to sustain any damage.

Johnson said the cause of the fire is also still undetermined, and the State Fire Marshal’s Office has been called into investigate, though no foul play is believed to have been involved.

“This is devastating for them,” said Nancy Hanson, who lives north of Meyer’s property on 890th Avenue.

The fire was reported just after 2 p.m. Wednesday and firefighters shot water at the blaze for three to four hours from all directions. Fire trucks were coming and going as they were being refilled with water.

Freeborn County Emergency Management Director Mark Roche said crews finally started packing up around 6:15 p.m. Hollandale firefighters were scheduled to be at the scene through the night, and then the investigation was planned to continue Thursday once daylight arrived.

Just before 5 p.m., there were northwest winds at 13 mph with gusts up to 23 mph, according to the National Weather Service.

The high wind gusts made it easier for the fire to spread.

As the firefighters battled the blaze, a few small sporadic fires in nearby fields also developed, but they were quickly extinguished.

A Gold Cross ambulance also sat nearby as a precautionary measure in case firefighters got overheated.

Barb Meyer said she was in Albert Lea at the time the fire started. She came home at about 5 p.m. and saw all the fire trucks and damage behind her home.

“I was scared to death, but then I saw everybody here doing their part and I calmed down,” she said. “Thanks to everybody who’s come in to help. It’s been tremendous.”

Friends and neighbors have brought her family food and have offered kind words.

She added she has not had much time to talk to her husband since the fire broke out because of the chaotic nature at the scene, but she does know there was smoke coming out of the sawmill shed when all of the sudden the shed went up in flames.

She is grateful the wind was blowing the direction it was, otherwise their home might have started fire as well.

She anticipated meeting with a representative from her insurance company sometime Thursday.

Ronald Hoag, who lives two miles south of Meyer’s property, said he and his wife, Pat, saw the smoke from their house and came to see what had happened.

He said they arrived at 2:30 p.m., and no Sheriff’s Office deputies or firefighters had yet made it to the scene.

“There was just lots of fire,” Hoag said. “Lenny was powerless.”

Hoag noted he felt sad to see Meyer’s property go up in flames and said he thinks Meyer had at least three employees.

“He runs a pretty good-sized saw mill,” he added.

The Minnesota State Patrol and the Freeborn County Sheriff’s Office also assisted at the scene. The Albert Lea Salvation Army provided sandwiches, snacks and beverages to the crews and family.