Saying good-bye to a junco bird

“Everything is nearly copacetic. I lost another job. The company I was working for relocated and didn’t tell me where. Yesterday, I decided to hit the drive-through at the Grab and Gulp for lunch. A fuzzy voice asked me what I wanted and I said, ‘I want a gigantic gutbomb, an excess of fries, a cherry pie and a gallon-sized chocolate shake.”

“The voice came back and asked, ‘Did you want pickles on your burger?’ I said that I did. ‘Did you want onions?’ I did. ‘How about lettuce, mustard or ketchup?’ Yes, yes, and yes. ‘OK, that’s one gigantic gutbomb, an surplus of fries, a cherry pie and a gallon of our award-losing chocolate shake. Your total is $539.72. Please pull around to the first window.’”

“That seems expensive,” I add.

“I gave the window woman my money. ‘One gigantic gutbomb, onion rings, apple pie and a gallon chocolate shake,’ she said as she tossed a receipt into my grease-stained bag.”

“The order wasn’t quite right,” I say.

“Why gripe about small mistakes? It was close. I took the bag. When I got home and opened the bag, I found chicken fingers, jalapeno poppers, a chocolate chip cookie and a small diet root beer.”

Saying good-bye to a junco

The leaves of the trees faced a single direction. The wind was a stern taskmaster. I looked up to see an escaped balloon floating overhead. Turkey vultures soared above it. The balloon red, the vultures black.

I looked down. I was holding a dying junco in my hand. The small bird had hit a window. I wished I could do more for the bird. I hoped I was a comfort. 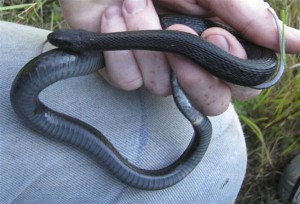 Pictured is a black garter snake. -- Photo by Tom Jessen of Madelia

State Farm Insurance estimates 2.3 million collisions between deer and vehicles occurred in the U.S. during a two-year period (2008-10). That’s 21.1 percent more than five years earlier, while the number of miles driven by motorists increased only 2 percent during that time. Such collisions are more likely during the last three months of the year and in the early evening.

For the fourth year in a row, West Virginia tops the list of states where an auto is most likely to collide with a deer. State Farm calculates the chance of a West Virginia driver striking a deer over the next 12 months at 1 in 42. Iowa is second with the likelihood of a car hitting a deer in the subsequent year being 1 in 67. Michigan (1 in 70) is third. Following in order are South Dakota (1 in 76), Montana (1 in 82), Pennsylvania, North Dakota, Wisconsin, Arkansas and Minnesota (1 in 99). Drivers in Hawaii are least likely to hit a deer (1 in 13,011).

“How much does a Canada goose weigh?” From 6 to nearly 20 pounds.

“How can I tell a white-footed mouse from a deer mouse?” Both mouse species have big ears and bulging, large, black eyes to go with white feet, white undersides and brownish topsides. The tail is sometimes as long as the head and body. The deer mouse’s tail is sharply bicolored — dark above, white below, and ends in a small tuft of white hairs. The white-footed’s tail is pale below (not white) and lacks the terminal tuft.

“I saw a huge insect that looked like a beetle at a softball field. What was it?” It could have been a giant water bug. It’s not a beetle, but a true bug 2-inches long and about 1-inch wide. Giant water bugs are common in lakes and ponds, frequently leaving the water to fly about the lights of parking lots or ballfields.

From the 1492 journal of Columbus

14 September. Steered this day and night west twenty leagues. The crew of the Nina stated that they had seen a grajao, and a tropic bird, or water-wagtail, which birds never go farther than twenty-five leagues from the land.

19 September. Continued on, and sailed, day and night, twenty-five leagues, experiencing a calm. This day at ten o’clock, a pelican came onboard, and in the evening another; these birds are not accustomed to go twenty leagues from land.

30 September. Continued course west and sailed day and night in calms. Four tropic birds came to the ship, which is a very clear sign of land, for so many birds of one sort together show that they are not straying about, having lost themselves.

A coal vein has been burning under the Pennsylvania mining town of Centralia since 1961.

According to the New York Department of Environmental Conservation, Blanding’s turtles take 18-22 years to reach sexual maturity and may live to be 70 years old.

Take me to your feeder

Squirrels are good at what they do. A new bird feeder allows a person using a remote control to decide if a squirrel should raid a bird feeder. The Squirrel Boss Bird Feeder was invented by an aerospace professional and is a shocking bird feeder. When the circuit in the bird feeder is activated while the squirrel is on the feeder, the squirrel gets a shock similar to the one we get when we walk across a carpet and then touch metal. The shock is harmless but squirrels will avoid it.

After the snowmelt of late April, early May, tens of thousands of garter snakes perform mating rituals in great tangled heaps at the Narcisse Snake Dens, north of Winnipeg.

She has a voice like warm soup and she’ll be dishing it out at Cross of Glory Lutheran Church’s Soup & Pie Supper in Hartland on November 3 from 4:30 to 7:00. You can sit in the good chair.

“Birds sing after a storm; why shouldn’t people feel as free to delight in whatever remains to them?” — Rose Kennedy

“There are glimpses of heaven for us in every act, or thought, or word that raises us above ourselves.” —Arthur P. Stanley