Sleeping in the rain 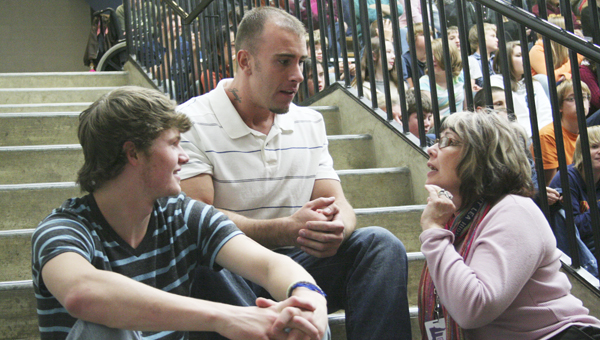 He laid down to go to sleep in the grass behind a garage, in the pouring rain.

“All I had were the clothes on my back,” he said. “I didn’t think this was what life was suppose to be like. I didn’t think that would be me when I picked up that first joint. All I cared about was getting high.”

Heilig, a former drug addict, shared what led to his addiction and recovery with students across the county on Monday as part of a Truth in Prevention campaign by the Freeborn County Partners in Prevention/Drug Education Task Force. 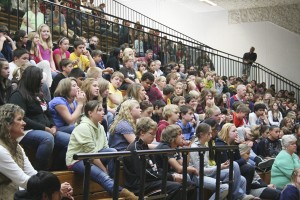 Students at Southwest Middle School learned about the devastation of youth addiction from Cole Heilig, a former student from the school at Monday’s event. Heilig is now a senior at Albert Lea High School. -- Michelle Haacke/Albert Lea Tribune

Heilig, along with Beau Hengtgen and Charles Evertz, both from the Twin Cities area, spoke to students at Albert Lea High School, Brookside Education Center and Alden-Conger High School on Monday.

By having students share their stories of substance use and abuse and how it affected their lives, members of the local drug education task force are hoping other kids will choose not to use alcohol, tobacco and other drugs.

“We wanted them to see for themselves that these are people who never thought they would get addicted, never thought that would happen to them,” said Alice Englin, coalition director for the Freeborn County Partners in Prevention. “Kids just like them who sometimes think, ‘Oh, I’ll just try it once, it won’t hurt.’ These speakers presented the outcome of their decisions to take that first drink, try that first pill.”

“This is the first year we’ve had a local person speak,” she added. “It really hits home with these kids, especially the kids at Southwest because this is a local kid.”

In fact, Heilig said it was during his years at Southwest Middle School that his road to drug addiction began.

After a childhood filled with mental, physical and emotional abuse, he found a connection with kids like himself.

“I had a friend in seventh grade whose dad smoked weed,” he said. “I thought, ‘What’s the harm?’ So I tried it once, and a second time, and a third time and I was hooked. I loved it. I couldn’t wait to get high every day and even higher on the weekends.”

The weed led to drinking alcohol and “popping pills.”

By this time, Heilig was living with his grandma, who he said loved him and took good care of him, but the drugs took precedence. “I didn’t know how to adjust to love; I was emotionally scarred,” he said. “Grandma didn’t know how to help. She tried. She reached out to me at least a hundred times.”

He said his life was spinning out of control by the time he hit rock bottom, and he went through treatment five different times before coming clean.

Heilig shared how he tried to beat the system when probation officers took him in for urine analysis.

“Have you ever drank a glass of vinegar, repeatedly?” he asked the students. “It’s not a good taste. It makes you want to vomit. That’s how far I was willing to do to clean out my system so I could get high again.”

Dotti Honsey, a truancy prevention specialist and member of the county’s drug education task force, remembers working with Heilig. She said the key to Heilig’s recovery, like with most people, came from within.

“It wasn’t until he made the decision that he didn’t want to live like that that he turned things around,” she said.

Heilig is proud that he’s been clean now, off drugs and alcohol, for one year and two months. He’s honed in on his studies and enjoys weight lifting after school and his job at Hy-Vee.

Although Heilig attends meetings and has ditched his “user friends,” surrounding himself with positive, sober people, the struggle continues every day.

“In school, I hear kids talk about parties and using,” he said. “It’s pretty common. People treat it like its nothing.”

It’s because of this he hopes his story will reach others, and participated in Monday’s event.

“I want to tell students that it’s life and death. This can happen to anyone, no matter your color or your gender,” he said. “The bottom is death.”

Southwest Middle School guidance counselor Jim Munyer remembered working with Heilig and commended his progress over the years. He also said he doesn’t see a lot of drug and alcohol issues in the middle school, nor has he seen an increase in statistics in recent years, thanks to programs like this.

He said the students were given a survey after the event, and overall they seemed to respond positively to it.

“The kids really enjoyed listening to the young people,” he said. “I think it makes a big difference in kids’ lives, listening to other kids who’ve gone through this.”

Monday’s event was coordinated by the Drug Education Task Force, which partners with Freeborn County Partners in Prevention to prevent and reduce youth substance use and abuse in Freeborn County.