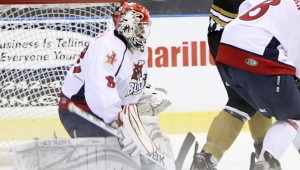 Amarillo Bulls’ goalie Nikifor Szczerba looks to stop a shot this season. Szczerba was one of the former Albert Lea players picked up by the Bulls. -- Andrew Dyrdal

Through its short stay in Albert Lea, the biggest highlight for the Thunder — a now defunct Tier II Junior A hockey team — was a late-season surge and playoff berth in winter 2010, despite the controversy surrounding the team.

Now for the eight ex-Thunder players who were picked up by the Amarillo Bulls after Albert Lea’s roster was sold to the Texas expansion franchise, winning is the highlight — and the reel keeps on running.

“Obviously there was a nucleus,” Bulls head coach Dennis Williams said, of when players arrived from Albert Lea. “I’m a big believer in these guys. They stuck through thick and thin.” 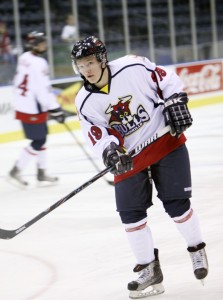 Amarillo Bulls’ forward Zach Smoot (19) skates on the ice at the Amarillo Civic Center in Amarillo, Texas. Smoot played for the Albert Lea Thunder last season and leads the Bulls in points so far this year with six goals and nine assists. -- Andrew Dyrdal

Lea’s membership at the end of the season because of the “pay to play” scandal.

The Thunder faced a $400,000 fine and still had games to play but forged through, and made the playoffs with a 19-34-5 record in their final season in southern Minnesota.

The players’ situations didn’t get any thinner in the sale to Amarillo, though. Despite getting a chance at a fresh start, there were no guaranteed roster spots, according to Williams.

Instead, each player had to earn their spot in tryouts just like they did in Albert Lea. Eight players from the Thunder roster made the Bulls team and finally the thick started getting thin.

Among the eight players that made the team were Zach Smoot, Nikifor Sczcerba and Luke Jenkins. None of the three players were standouts in Albert Lea, but they’re making their mark in Amarillo.

“Nikifor had a lot of skill and raw material,” Williams said, of when Sczcerba arrived in Amarillo. “He wasn’t in great shape so I rode him really hard to get into better condition and he’s taken his game to a whole new level.”

After playing backup to goalie Joe Rodgers in Albert Lea, Sczcerba has played in 13 of 14 games for the Bulls this season, and is often found riding an exercise bike after each game.

“We’re running (our program) like a Division 1 college in a pro setting and (Sczcerba) bought in,” Williams said. “He’s been absolutely terrific giving us a chance on any given night to win hockey games.”

Smoot split time last season with the Thunder and Janesville Jets, but his offensive numbers have greatly improved this season after recording two goals and eight assists through 17 games with Albert Lea.

“He’s got a ton of talent,” said Williams, of Smoot. “He has a ton of skill and is very quick.”

Williams said that Smoot wants to play Division 1 college hockey and he sees him achieving that goal.

“He’s thirsty for challenges,” Williams said. “He’s fun to be around and to work with.”

Williams said that one of his hardest working leaders is former Thunder defenseman Luke Jenkins of River Falls, Wis.

Williams said he is trying to cultivate and grow an attitude of winning in Amarillo.

“I’m really proud of all those guys that stuck it out here from last year’s team,” Williams said.

So far this season, the Amarillo Bulls are 10-3-1 and currently in third place in the south division just two points shy of the division leading Texas Tornado.

The Amarillo Bulls head coach Williams joined the team after serving as an assistant hockey coach at Bowling Green University.

Prior to BGU, Williams was head coach at Bowling Green State University where he inherited a team that went 3-21-1 the year before he arrived. After his third and final year at BGSU, the team went 17-5-5 with a top five national ranking, according to the Bulls website.