Funeral services for Telores Knutson, 87, of Albert Lea will be held at 1:30 p.m. Wednesday at Bayview/Freeborn Funeral Home. The Rev. Daniel Baker will officiate. Interment will be at the Round Prairie Cemetery. Visitation will be from 4 to 7 p.m. Tuesday at Bayview/Freeborn Funeral Home and one hour prior to the service. To sign the guest book, go to www.bayviewfuneral.com. 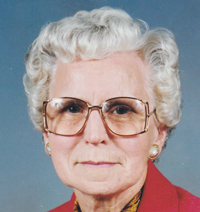 Telores O. Knutson was born Nov. 5, 1922, the daughter of Albert and Gena (Anderson) Nesset. She grew up in the Glenville area attending country school. On April 27, 1941, Telores was united in marriage to Henry Knutson in Albert Lea.

Telores was a member of the Son’s of Norway where she was active in choir and the Uffda band. She enjoyed cooking, baking, fishing, hunting, yard work and gardening, especially strawberries and raspberries. Telores enjoyed life very much, entertaining, and visiting family, friends and those in nursing homes. She will be sadly missed by her daughter, grandson, family and friends