Funeral services for Tena May DeBoer, 85, of Hollandale will be held at 10:30 a.m. Tuesday at Hollandale Reformed Church. The Rev. Neal Ooms will officiate. Interment will be at the Hollandale Cemetery. Visitation will be from 5 to 7:30 p.m. today at Bayview/Freeborn Funeral Home and one hour prior to the service. To sign the guest book, go to www.bayviewfuneral.com. 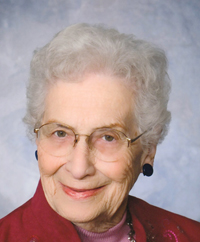 Tena DeBoer was born Oct. 23, 1924, in Sneek, Friesland, the Netherlands to Roelof and Pietje (Schilstra) Karsten. Tena grew up in Sneek where she graduated from high school. After World War II Andy moved to the United States. He and Tena corresponded for two years before his return to the Netherlands. Tena was united in marriage on Sept. 21, 1949, to Andrew DeBoer in Friesland, the Netherlands. Together they moved to Fulton, Ill., where they farmed. Tena worked at Burpee Seed Company and Volkmann’s Furniture. They then lived in California for nine years where their three daughters were born. From there they moved back to Erie, Ill., to farm. Erie is where their son was born and they farmed for 14 years. After several other moves Tena and Andy settled in Hollandale when Andy retired to be closer to their family. Tena was a member of St. Jude’s and Hollandale Reformed Church where she was a part of HRC Quilters. She enjoyed being a homemaker, traveling, reading, crocheting and quilting. She loved spending time with her family and having coffee with friends.

Tena was preceded in death by her parents; husband, Andy; sister, Jane (Ed) Coers; three brothers-in-law and their wives; one sister-in-law and her husband; and niece, Petra Coers-Adams.