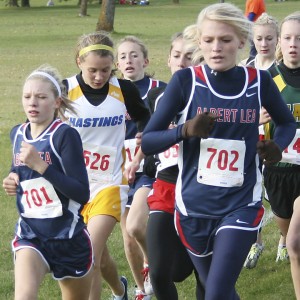 When Monson went down, Thompson stepped in to lead

Call it coincidence, but around the same time Albert Lea cross country standout Chrissy Monson was diagnosed with stress fractures in both her legs this summer, Bailey Thompson moved to town.

Thompson’s — a sophomore transfer from Mankato East High School — arrival couldn’t have come at a better time as she stepped in to fill the void left by Monson at the top of the girls’ cross country team’s lineup. And when Monson returned from injury, the two lifted a place the Tigers haven’t been in the past decade: A top three finish in the Big Nine Conference and a top four finish in the section.

“We called ourselves the Tiger Pack,” Monson said.

Monson was diagnosed with stress fractures in early July and couldn’t run for eight weeks.

She paired with another injured runner, Carol Lein, and the two worked out together in the pool and on exercise bikes, and wouldn’t end drills until their heart rates reached a high level.

Meanwhile, Thompson was leading the Tigers on the course, placing first for Albert Lea in each meet Monson missed with impressive times. The transition was easy, Thompson said, because she had family in Albert Lea and had been visiting for years.

“She had to take the leadership role when Chrissy was hurt,” Haney said, of Thompson. “She and Chrissy were a great team together.”

Then in early October, Monson began running again, but her times were unimpressive in practice.

Monson ran her first competitive race on Sept. 31. She won a junior varsity meet in 16 minutes and 21 seconds, while Thompson placed 10th overall in 15:46.57.

“I was just hoping she would be able to compete at the level she wanted to,” said Haney, of Monson.

It wasn’t long after that the Tiger Pack was born.

“They’re great competitors and great friends,” Haney said. “They root for each other and want each other to do well.”

On Oct. 19, Monson and Thompson each earned Big Nine All-Conference honors by placing first and fifth, respectively in the conference meet. The two hoped to both be celebrating together again on Thursday at the Section 1AA meet, but shortly after Monson crossed the finish line in first, Thompson crossed it in 11th and one place shy of qualifying for the state meet. It was the second consecutive year that Thompson was edged out the state meet by one place.

While the Tiger Pack won’t be running together at state, Monson set her goal to win the state championship.

After missing the first six meets this season, that would be quite a feat. But Haney isn’t putting anything past Monson.

“She’s an amazing kid and she’s easy to coach,” he said. “She’s drive and loves to compete. Those are things that aren’t coachable. She just had them intrinsically.