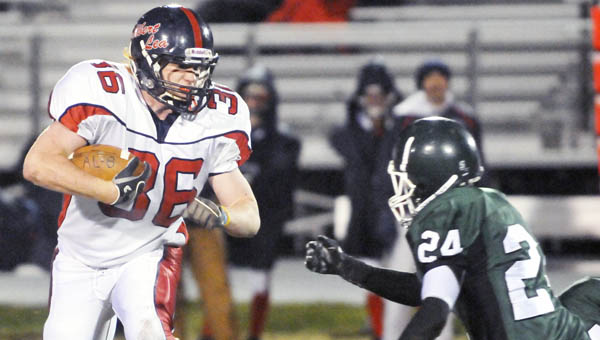 Albert Lea seinor Dillon Stolt (36) carries the ball as Faribault's Aric Hallet (24) goes for the tackle in the first half of Tuesday's Section 1AAAA game at Bruce Smith Field. The Tigers fell 14-6 to the Falcons. -- Tyler Mason/Faribault Daily News

Down 14-6 and driving against the wind late in the fourth quarter, the Albert Lea Tigers football team had chances to tie the Faribault Falcons in the first round of the Section 1AAAA tournament.

On fourth-and-five on the Falcons’ 35-yard line, the Tigers’ Makael Lunning took a double reverse to the one-yard line with under five minutes to play. The play was called back on a holding penalty, though, setting the No. 6-seeded Tigers (2-7, 1-3 Section 1AAAA) up with fourth-and-17 on the 43-yard line.

On the next play, Kyle Kriewall appeared to have connected with Aaron Klatt for a 33-yard reception, but officials called Klatt out of bounds, ending the Tigers’ chance at an upset.

The Tigers held the Falcons to just 93 rushing yards after halftime after giving up 185 in the first half, and moved the ball better on the ground with a couple trick plays.

Penalties and turnovers in the red zone, though, ended the Tigers season.

“I’m really proud of our guys for how we reacted in the second half,” Albert Lea head coach Clay Anderson said. “We played great defense and moved the ball well, we just couldn’t get over the hump. 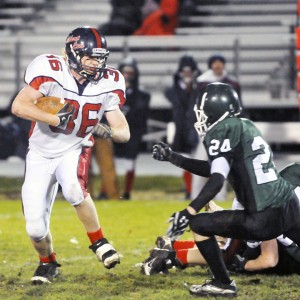 Albert Lea seinor Dillon Stolt (36) carries the ball as Faribault’s Aric Hallet (24) goes for the tackle in the first half of Tuesday’s Section 1AAAA game at Bruce Smith Field. The Tigers fell 14-6 to the Falcons. — Tyler Mason/Faribault Daily News

The Tigers opened the game with a solid offensive drive and moved the ball to the Falcons’ 10-yard line.

Down 6-0, Albert Lea’s Ethan Abben ran the ball nine yards but fumbled on the one-yard line giving the ball to Faribault.

The Falcons, in turn, drove 99 yards and scored on fourth-and-goal on the one-yard line just four seconds before halftime, and extended their lead to 14-0.

In the third quarter, Abben had two long runs to give the Tigers first-and-goal at the one-yard line. Two plays later, Abben went into the end zone untouched to pull the Tigers within eight at 14-6.

With less than six minutes left in the fourth quarter, the Tigers faced fourth-and-six from their own 40-yard line.

The Tigers lined up to punt to directly snapped the ball to Abben who faked a handoff to Dalton Westerlund, delayed and then ran for 35 yards.

That was the Tigers’ final drive, though, as the incomplete pass attempt from Kriewall to Klatt shortly after turned Albert Lea over on downs.

“We had a bunch of seniors that worked hard and improved as the year went on, and it showed tonight,” Anderson said. “I just felt so bad that we couldn’t get a win and extended the season, because I had a great time working with these guys.”

Faribault plays at No. 2 New Prague Friday in the Section 1AAAA semifinals.