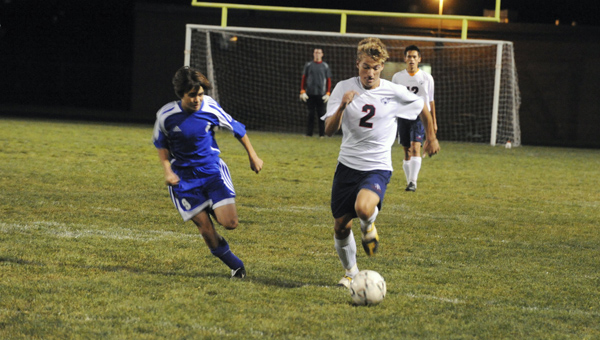 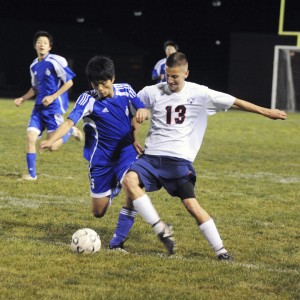 Albert Lea’s Cal Pirsig (13) fights for the ball with Winona Cotter’s Kweon Su Kim (5) during the second half of Thursday’s Section 1A quarterfinal match at Hammer Field. -- Andrew Dyrdal

6-1 in the Section 1A quarterfinals at Hammer Field.

The Tigers lead Cotter 4-0 at halftime on efficient scoring. Albert Lea found the back of the net on four of eight first half shots.

“We did a fantastic job of keeping our shots on the net all night long,” Albert Lea head coach Elia Romano said. “We were very purposeful and very confident.”

Logan Tufte scored the Tigers’ third goal at 16:12 off Darik Weigel’s corner kick, and Pirsig put Albert Lea up 4-0 before halftime at 32:10 on a goal assisted by Anthony Tate.

The Tigers moved the ball around well in the second half and scored in a variety of ways.

“Their first touches were cleaner than I could have hoped for,” Romano said.

Smed scored his second goal of the match at 47:15 on Pirsig’s assist before the Tigers lost the shutout.

Albert Lea marked Cotter’s Alex Lubahn — the Ramblers top scorer — for the entire game, but Lubahn score on a penalty kick at 57:31 to put Cotter on the scoreboard. 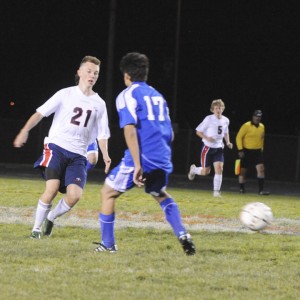 The Tigers’ Cesar Herrera scored his first varsity goal off a volley later in the half, assited by Pirsig to make the final score 6-1.

The Tigers play for a spot in the Section 1A championship game Saturday at No. 1-seeded Rochester Lourdes (13-2-3, 8-0).

Kickoff is slated for 9 a.m. at the Rochester Regional Sports Stadium.