Turkeys cavorting around the lawn

“Everything is nearly copacetic. I’m so tired, I sway in the breeze. I am so busy, I couldn’t keep up if there were two of me. I’m like the guy who said, ‘I regret that I have but one life to give to my country.’”

“That was Nathan Hale,” I say.

“That’s how much you know. Nathan Haley said it. That’s why the saying is known as Haley’s Comment. I went to see Doc Splint Eastwood. I wouldn’t see him again to have him doctor my donkey. I’m thinking of buying a donkey just so I’d have a donkey that I wouldn’t take to see Splint.”

“What now?” I wonder aloud.

“I had a cough, so I consulted that old quack. Splint gave me a prescription. I took it to Ginger Vitis at the drugstore and she gave me a bottle of some kind of medicine that sounded like the name of a heavy metal band. I figured it was cough syrup. I drank it. It turned out that it was a laxative instead of cough syrup. I complained to Splint. He told me to calm down and that the laxative had cured my cough.”

One turkey watches other turkeys

I was having a bowl of raisin bran. I was in that breakfast cereal trance. You know it. We eat spoonful after spoonful without spill but our minds are elsewhere. Suddenly, my meditation was interrupted by the sight of three wild turkeys frolicking on the lawn. As I gazed out the window, the turkeys jumped, flapped their wings and cavorted. That’s right, as I looked out my kitchen window, there were turkeys cavorting on my lawn. The neighborhood is changing. 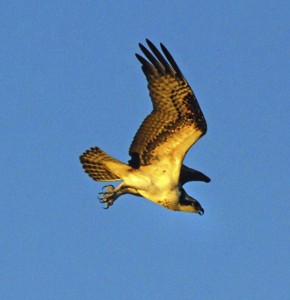 Photo of an osprey by Darcy Sime of Alden.

We have many gulls and they are important to Minnesota. Some of us have been fortunate enough to spend time around Gull Lake. There is a plethora of businesses and resorts that carry “gull” in their names. There is a city named East Gull Lake and, of course, a river named the Gull River. Some of us are gullible. A book titled “Jonathan Livingston Seagull” sold well. We tend to call the gulls, “seagulls.” They are not really seagulls and that may be what they are complaining about with all their squawking. They might be more appropriately called landfill gulls. We don’t have a sea in my neck of the woods, but we do have gulls. If I see a gull along a river, it is a rivergull. Along a lake, it’s a lakegull. If a gull is spending time in a bay, it’s a baygull.

Daniel Otten of Hayward showed me photos of a field covered with spider webs. If all those webs were to unite, they could trap a cow. One of the photos would be the perfect gift for that certain person on your Christmas list — that friend or relative who suffers from arachnophobia. What is the reason for this proliferation of spider webs? Spider webs catch the eye when dew condenses on them and presents white platforms on a dark landscape. The webs consist of flat sheets of silk placed horizontally on the ground or other level surfaces. A section of the sheet curls into a cylindrical, silken tunnel in which the spider resides. The tunnel leads into hidden regions beneath curled leaves or grass blades. When an insect crosses the web, the spider feels the vibration and rushes out to grab the prey. Grass spiders or funnel weavers are incredibly quick and can dash from their hiding place at lightning speed. If you touch a grass spider web, you’ll discover that the silks aren’t sticky. If you jiggle the web slightly, the spider may rush from the tunnel planning to grab a victim. The females are typically in the web, spending their time capturing and eating prey.

Females do not search for mates, but wait for males to find them. Males, on the other hand, spend most of their lives wandering around searching for females. The male dies shortly after mating. Females lay eggs in the fall, wrap them in silk, deposit the egg sacs in secret nooks and then die in the first frosts. The spiderlings hatch next spring. An old saying claims that when dew is on spider webs in the morning, it would be a beautiful day.

“Why do the hummingbirds fight at the feeders?” It’s an election year. That requires attacks from the left and from the right. They are attempting to protect a food source.

“I saw a large insect that looked like a wasp, with long tubes hanging from the rear. What was it?” Ichneumon wasps parasitize garden pests such as cutworms, corn earworms, grubs and caterpillars. The largest of the parasitic wasps, the adults measure up to 1 1/2 inches long, have long antennae and slender bodies. Females have long tail-like egg-laying tubes.

“Do ospreys eat only fish?” Research has shown that about 99 percent of an osprey’s diet consists of live fish. Ospreys migrate individually, not in flocks, to California and the Gulf Coast south to Argentina.

“In August, I found a number of feathers in my yard. They appeared to be from different birds and it didn’t look like any birds had fallen prey to a predator. What is going on?” Birds change clothes. August is a time when many birds don new plumages. After young birds have fledged, adult birds molt. Summer is a good time to molt because the temperature is warm (conserving energy) and food is plentiful.

Snakes in the trees

Tom Jessen of Madelia visited the Watonwan Waterfowl Production Area after September’s torrential downpour. He was able to paddle a canoe across the huge flat valley. He told me that he was surprised to see garter snakes in the trees along the edge of the forest. He added that the snakes were flushed from the grasslands by the rising waters and were hanging out in the trees, sunning in the warm afternoon sun.

“To be without some of the things you want is an indispensable part of happiness.” — Bertrand Russell

“Look deep into nature, and then you will understand everything better.” — Albert Einstein