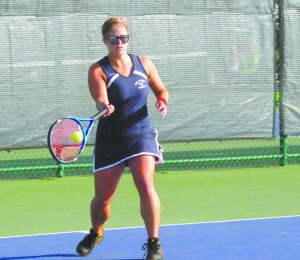 The United South Central girls’ tennis team beat Saint Peter 4-3 in the Section 2A semifinals Monday, but lost 7-0 to No. 4 Waseca in the finals shortly after.

“Waseca played a tough, tough match,” USC head coach Kim Stervermer said. “It’s too bad that we had to end our amazing season on a loss, but I guess that’s how it has to go.”

USC played Waseca to a 5-2 loss on Sep. 27, but the Blue Jays were too much for the Rebels after a tough USC-Saint Peter match.

“I think (Waseca) was a little more rested than we were,” Stevermer said. “They got a little easier match in the semifinal round, but that’s what you get when you’re seeded No. 1”

Rachel Mattick played the most competitive match for the Rebels at No. 2 singles, losing to Abby Collins 6-0, 3-6, 5-7.

Against Saint Peter, Ali Wood and Monica Bye won the biggest match for USC at No. 3 doubles, defeating Kami Smesmo and Mackensi Wenner 6-4, 6-2.

“It was a big win for third doubles,” Stervermer said. “Saint Peter thought they could get that point.”

The section finals loss ends USC’s season in which they went 10-0 in the Gopher Valley Conference, and claimed a conference tournament title.

“I am proud of the girls and how they handled the loss,” Stervermer said. “And what they accomplished this season.”