Vernell Gordon Kvale, 79, of Lake Mills, passed away at his home on Sept. 30, 2010, following a lengthy battle with cancer. It was his 79th birthday. 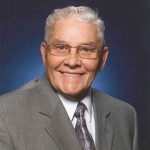 Funeral services will be held 10:30 a.m. at Salem Lutheran Church in Lake Mills on Tuesday, Oct. 5, 2010, with the Rev. David E. Jordon officiating.

Visitation will be 4 to 7 p.m. Monday evening, Oct. 4, at Mittlestadt Funeral Home, 902 East Main Street, Lake Mills. And again one hour prior to the service at the church.

The family requests memorials be made to Salem Lutheran Church or Muse-Norris Hospice Unit in Mason City in his honor.

Vernell was born at his parents’ home, in rural Winnebago County, Iowa, on Sept. 30, 1931, the son of Rudolph and Olga (Mostrom) Kvale. Vernell was baptized in North Prairie Lutheran Church, and then confirmed at Salem Lutheran Church, Lake Mills, which remained his church for the rest of his life. He attended the Colby and Midlang Country Schools through the eighth grade and graduated from Lake Mills High School in 1949.

Following high school, Vernell lived with his sister, Doris and her husband, Dick, working their farm with them near Radcliffe, Iowa. He was drafted and served on active duty in the United States Army from 1953-55, achieving the rank of staff sergeant. He was a member of the Army Reserve until 1961. He was an active member of American Legion Otto-Chose Post No. 235 in Lake Mills, serving as Post Adjutant for over 35 years and on countless firing squads and parade honor guards. In 2007, he was recognized by the national American Legion organization for 50 years of continuous membership and in April 2009, he was part of the Winnebago County Honor Flight to Washington, D.C. These were two of his proudest achievements.

Vernell married Violet Elaine Troe on April 1, 1956, at Emmons Lutheran Church. To that union was born five children: Cathy Jo, Valerie Gail, Roy Allan, Ellen Louise and Neal Gordon. Vernell and Violet farmed together near Emmons until moving to Lake Mills at the end of 1981. Upon moving to town, Vernell managed the Lake Mills Creamery for several years, making thousands of pounds of butter weekly for delivery to local grocery stores. In 1987, he accepted a position as custodian at the Lake Mills Community School where he worked for 10 years. He loved this job because of the wonderful children and faculty members he met at the school. After his retirement there, he worked in carpentry with his childhood neighbor, Ray Tweed, and later assisted various farmers with harvesting. Throughout his life, Vernell wrote poetry and shared many of his original poems at Memorial Day and Veterans’ Day ceremonies and retirement parties for friends and family.

Vernell was truly an Iowa country farm boy but later in life, he discovered a love of travel and enjoyed attending UNI and University of Iowa sporting events, a Caribbean cruise, and trips to Europe and many destinations around the United States, with Violet and various children and grandchildren. He was happiest being anywhere with Violet, better if they were with their children and with as many grandchildren as possible perched on his lap at all times. He avoided arguments and conflict, preferring to share a smile, a joke or a gentle word with anyone whenever possible.

Vernell is survived by his beloved wife of 54 years, Violet; his children: Valerie, and her fiancée, Bruce Polacek, Twin Lakes; Roy, Lake Mills; Ellen and her husband, Philip Giuntini, Oakton, Va.; and Neal and his wife, Tina, Cedar Falls, Iowa, four grandchildren (Samantha, Paige, Taylor and Matthew), a sister, Doris (Dick) Ellwood, Radcliffe, Iowa, two brothers: Robert (Shirley) and James (Gloria), both of Lake Mills, cousins, nieces and nephews. He was preceded in death by an infant brother, an infant daughter, Cathy Jo, his parents, and his wife’s parents.

You can contact the family with on-line condolences at: www.mittelstadtfuneralhome.com.