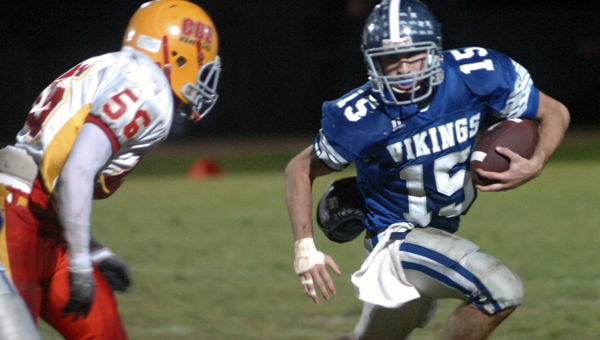 Northwood-Kensett’s quarterback Spencer Capitani runs away from a Clay Central-Everly defender Wednesday in the first round of Iowa’s Class A postseason tournament. -- Jon Theuer/Albert Lea Tribune

NORTHWOOD, Iowa- Northwood-Kensett running back Dylan Nitcher had a 49 yard touchdown run with six minutes and 35 seconds left in the fourth quarter that pushed the Northwood-Kensett Vikings (5-5 overall) football team past the Clay Central-Everly Mavericks (7-3 overall) 12-10 in the first round of the Class A playoffs Wednesday night in Northwood.

“I thought both teams did a heck of a job,” Northwood-Kensett coach Dave Capitani said. “It was a tough game for anyone to lose. They are an excellent football team. They are coached well and there kids play hard. It’s a great win for us.”

On a rainy and windy night, things didn’t start out well for the Vikings.

The Mavericks opened the scoring in the first quarter with a 26 yard field goal from Jared Schoelerman to push Clay Central-Everly out to an early 3-0 lead.

Minutes later after a Northwood-Kensett fumble, it was the Mavericks again finding the endzone as Eric Harvey hauled in a 26 yard touchdown pass from Schoelerman to put Clay Central-Everly up 10-0 after the first quarter.

The Vikings got on the board in the second quarter as Northwood-Kensett quarterback Spencer Capitani rumbled into the endzone from ten yards out to cut the Mavericks lead to 10-6.

The score remained 10-6 until the fourth quarter.

With 6:31 left, the Vikings defense stopped Clay Central-Everly on a crucial fourth and one to give the ball back to the Northwood-Kensett offense with 6:35 remaining.

On the first play from scrimmage, it was running back Dylan Nitcher who bounced to the right and found a hole and bolted 49 yards for the go ahead touchdown to put the Vikings on top 12-10.

“They really tried to take stuff on the outside away,” Capitani said of Nitcher’s run. “We had plenty of time. I pictured it would be one of those longer drives possibly. But we were going to go right at them and see what we could do.”

With the lead in hand, the Vikings defense held the Mavericks the rest of the way to secure the 12-10 win.

After a shaky first quarter, the Northwood-Kensett defense settled down and held Clay Central-Everly scoreless over the final three quarters.

Dylan Nitcher led the Vikings in rushing with 13 carries for 78 yards, while Nik Werner had 12 carries for 75 yards.

Quarterback Spencer Capitani was 3-of-5 passing for 36 yards.

Jacob McGrane led the Vikings on defense with 14 tackles, while Bryan Sime and Tanner Haberman both racked up 10 tackles each.

With the win, the Vikings will play on November 1st, as they travel to play Gehlen Catholic, LeMars.