Blaire Dressen and Daniel Andrews of Sioux Falls, S.D., were married at the home of the bride’s parents on Sept. 4, 2010, at 7 p.m. Judge Steven Schwab performed the double ring ceremony. 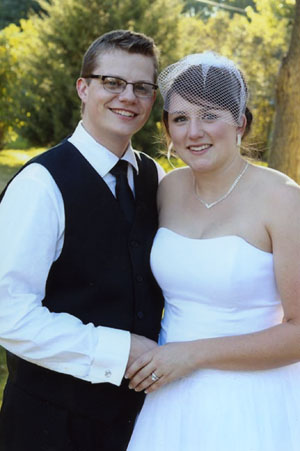 The bride is the daughter of Kavin and Diann Dressen of Albert Lea. The groom is the son of Paul and LuAnn Andrews of Pipestone and Kim Andrews of Grand Rapids.

Matron of honor was Rachel Dressen, sister-in-law of the bride. Bridesmaids were Heather Stegenga, Tyneal Steele, Emily Bartusek and Brittany Buckmaster, all friends of the bride.

Ushers were Casey Dressen, brother of the bride, and Cory Carlson, brother-in-law of the groom.

Musicians were Jon Callies and Nate Lampson. They performed “When I’m Sixty Four” as the recessional.

Blaire and Danny went on a hiking trip to the Porcupine Mountains in the Upper Peninsula of Michigan.