Holly Haines and Eric Carlson were married on Aug. 14, 2010, at 3 p.m. in Two Harbors. The Rev. Dana Parvey performed the double ring ceremony. 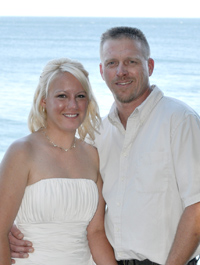 The groom is the son of Mike and Karin Novak of Dallas, Wis. Grandparent of the groom is Jean Paulson of Walker.

Participants were Darin and Jenny Stanley, friends of the couple, of Elko, and Mike and Karn Novak, parents of the groom, of Dallas, Wis.

A reception followed the ceremony at Blackwoods in Two Harbors.

The bride is a graduate of Alden-Conger High School and works at Trail’s Travel Center.

The groom is a graduate of Lakeville High School and works at Allen’s Service.

After a wedding trip to northern Minnesota, the couple resides in Albert Lea.