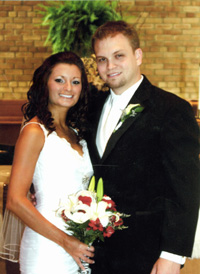 The bride is the daughter of Julie Sorenson of Albert Lea and the late Scott Sorenson.

The groom is the son of Tim and Connie Rounds of Scottsbluff, Neb.

Best man was Kyle Fedorchik, friend of the groom, of Scottsbluff, Neb. Groomsmen were Marcus Harvey, Chris Pieper, Matt Kollars, Chris Becker and Ray Longoria, all friends of the groom.

Flower girls were Anna Peterka, niece of the groom and Nevaeh Kinney, daughter of Brie and Mike Kinney. Ring bearer was Jon Peterka, nephew of the groom.

The reception was held at the Moose Lodge in Albert Lea.

Erin is the operations manager at Texans Credit Union in Lewisville, Texas.

Derek is a government underwriter assistant at Franklin American Mortgage in Dallas, Texas.

After a honeymoon in Cancun, the couple will reside in Little Elm, Texas.