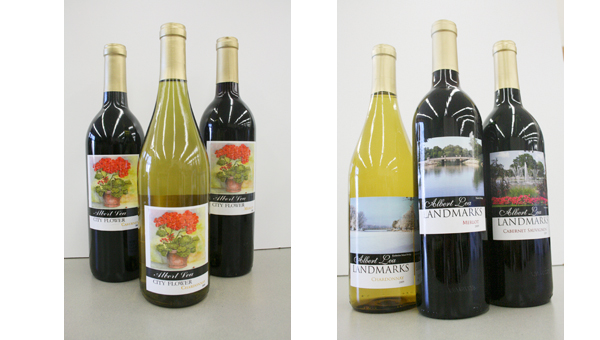 Wines at Hy-Vee feature Albert Lea on their labels

Everyone’s heard the old saying, “Don’t judge a book by its cover.”

And along those lines, wine connoisseurs will recommend not judging a wine by its label. 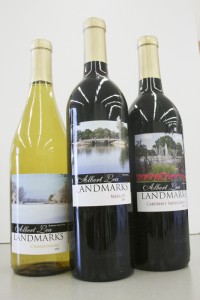 However, Hy-Vee Wine & Spirits in Albert Lea is finding that selling wines with local labels not only creates foot traffic to the store but also bolsters city tourism.

The current label being promoted features a red geranium, the original work of Lu Callstrom, president of the Albert Lea Art Center.

“We’re selling to both locals and visitors,” said Nicole Cole, assistant manager of Hy-Vee Wine & Spirits. “We generally don’t get many tourists, but this has been popular for people who used to live here and return to visit or people with friends who visit and want an Albert Lea memento.”

According to Hy-Vee Wine & Spirits Manager Al Toft, the store began selling wines with local labels in December 2009. He got the idea from another Hy-Vee store which produced its own label on a wine.

The wines are cellared and bottled by Rutherford Wine Co. of St. Helena, Calif., and shipped to the store with no labels. 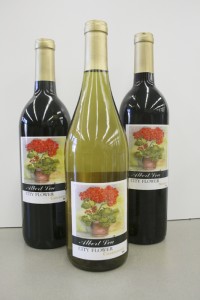 The labels are printed locally and adhered to the bottles at Hy-Vee.

Toft said he collaborated with Susie Petersen, executive director of the Albert Lea Convention and Visitors Bureau, to choose the artwork featured on the first set, titled “Landmark.”

Three photos were chosen to grace three different flavors of wine in the 2009 set: a summer scene of Fountain Lake decorated the cabernet sauvignon, a winter scene of Katherine Island was featured on the chardonnay and a photo of Hatch Bridge was chosen for the merlot.

Petersen thought the idea was super from the get-go.

“What’s really fun is when I go to trade shows, a lot of folks comment what a great idea this is,” she said. “It’s great because the photos show off our community and are a great selling point for our community.”

Toft said he was approached by the Albert Lea Art Center about the current series, titled “Albert Lea City Flower.”

Callstrom’s original red geranium watercolor was chosen for the label of the 2010 set. All three flavors of wine feature the same artwork in this set.

Callstrom said she originally painted the geranium after she was approached by Downtown Albert Lea. It took about a week to create and has been used on greeting-type cards promoting the city. 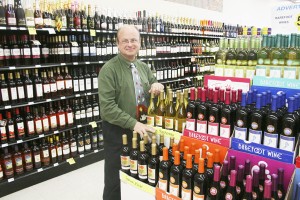 She said she had no idea her art had been chosen for the Hy-Vee label until after the wine bottles were being sold in the store — but was thrilled nonetheless. She credited Joyce Nixon for spearheading this effort.

Toft added that the fundraiser was such a success that he’s nearly run out of the cabernet sauvignon with the geranium label since the event.

“We’ve had a really good response to it,” he added.

Toft said that while no decisions have been made for a 2011 set just yet, he likes the idea of continuing the series with a photo or artwork of another local landmark on the California wines.

“There are things or places in the area everyone is familiar with, so its fun because they recognize those,” he said.

According to Toft, Hy-Vee Wine & Spirits is the only place in Albert Lea that sells the wine with these labels.

He added that his store carries some Minnesota wines, as well.