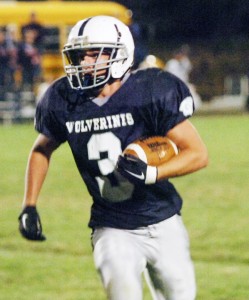 GLENVILLE — The Glenville-Emmons defense stuffed Mabel-Canton on a crucial fourth down with 30 seconds to play Friday, that allowed the Wolverines (3-3, 3-2 Southeast) to run out the clock and capture a 28-20 victory over the Cougars on Homecoming.

“It was a heck of a game for us,” Wolverines head coach Ryan Kelly said. “They battled us all the way.”

The biggest play of the game came with 40 seconds left.

Down by eight, Mabel-Canton had to convert on fourth-and-five on their own 47-yard line to have a chance to tie the game.

The Cougars ran off the left side and the Wolverines defense pounced and pulled the Mabel-Canton running back down just inches away from the first down marker to end the game.

“Huge,” said Kelly of the play. “Our defense was scrapping and we dug in and got the stop when we needed it.”

Mabel-Canton struck first in the first quarter with a drive that ate up almost six minutes of clock and ended in an Andy Otterness two-yard touchdown run to put the Cougars up 7-0.

On the ensuing kickoff, The Wolverines’ Peter Hansen darted through Mabel-Canton defenders to take the kickoff 76 yards for a touchdown to make it 7-6.

Glenville-Emmons added to the lead in the second quarter with a Zach Williamson four-yard touchdown run that pushed the lead to 12-7 at halftime.

After halftime, the Wolverines used a great kickoff return by Peter Hansen to set up at the Mabel-Canton 39-yard line.

One play later, Glenville-Emmons’ running back Derek Olson rushed the ball 39 yards for a touchdown to put the Wolverines ahead 20-7.

Mabel-Canton responded, though, with a Jacoby Bigalk 15-yard pass to Andy Otterness on the next drive to cut the lead to 20-14.

The score didn’t stay that way for long, however. On the next Glenville-Emmons drive, Zack Williamson threw a 34-yard touchdown pass to Andrew Lau to push the lead back up to 28-14.

The score stayed that way until the fourth quarter when Andy Otterness scored from one-yard out to pull the Cougars within 28-20.

Derek Olson led the Wolverines offense with 12 carries for 94 yards and a touchdown, while Landon Hall had 11 carries for 75 yards.

Zack Williamson went 4-for-10 with 58 yards and a touchdown and an interception passing.

Williamson also rushed 12 times for 33 yards and a touchdown.

Andrew Lau led the Glenville-Emmons receivers with one reception for 34 yards and a touchdown.

While the offense found its rhythm, the Wolverines defense also made life tough on the Cougar’s offense.

The Glenville-Emmons defense played their corners one-on-one with the receivers, while stopping the Mabel-Canton run game.

“We feel our corners are good to where we can man up with anyone,” Kelly said. “We had to stop the counters and traps.”

Perry Kirsch and Landon Hall both had 13 tackles on the night for the Wolverines.

Andrew Lau had 11 tackles and had a highlight reel one handed interception in the first quarter as well.

Tyler Woodside and Michael Polinder both recorded six tackles and a sack.

On special teams, Peter Hansen had 190 yards in kick returns and had a touchdown for Glenville-Emmons.

The Wolverines are back in action next Friday as they travel to Houston to take on the Hurricanes.