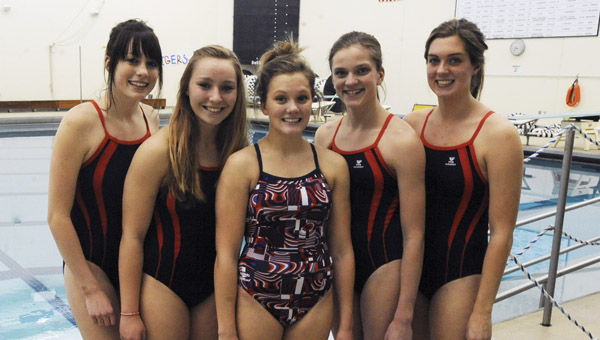 Before the season began, Albert Lea girls’ swimming and diving coach Jon Schmitz knew he had a bulk of young talent that just needed to be developed.

That talent cultivated throughout the season and came to fruition on Oct. 19 when the team won their first duel meet of the season.

They followed that performance by placing ahead of Austin, Rochester Mayo and Mankato East at the Big Nine Conference meet and sending five girls to the Class A state meet today, including the first diver in 19 years.

“We figured we had a lot of potential in the pool,” Schmitz said. “We just had to bring that out.”

State qualifiers from Albert Lea include the 200-yard medley relay team of Galen Schulz, Morgan Field and Amy and Lindsey Horejsi, and diver Karli Kriewall. Field and Lindsey are also swimming in the 100-yard breaststroke.

“We really hit it at the right time,” Schmitz said. “We had a different team at the end of the season than what we had at the beginning. We’re happy with the progress.”

The Class A state meet takes place at the University of Minnesota Aquatic Center in Minneapolis, a place Kriewall is familiar with.

The diver, who broke two school records this season, trained there in the offseason and hopes place in the top 16 against the best divers in the state. Schmitz said he thinks she can medal with a top eight finish.

“She’s got a lot of talent,” he said, of Kriewall. “She’s that caliber of diver. If she goes out there and performs she’ll reach that level.”

Schmitz hopes the No. 15 ranked 200-yard medley relay team can crack the top 16 and participate in Saturday’s finals.

“They’ve got to go out there and swim their best to do that,” Schmitz said, nothing the medley relay will be a tight race.

He hopes the breaststrokers improve their times.

Field and Horejsi are ranked No. 22 and 27, respectively.

“We’re a young team and it’s a big honor for these girls to be up there,” Schmitz said.

Kriewall dived at noon today and the swimmers start at noon Friday. The swimming and diving finals are at noon Saturday.