A night scene picturing Hatch Bridge is the winning backdrop for this year’s Albert Lea-Freeborn County Chamber of Commerce’s ornament.

The photo, taken by Albert Lean Sean Passingham, will be showcased on the 2010 ornament, which is for sale at the chamber office in Northbridge Mall or at Doyle’s Hallmark. 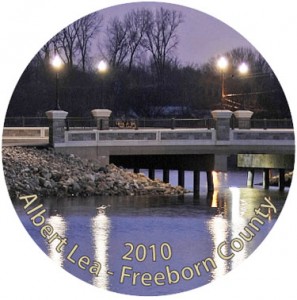 Tami Jensen, chamber operations manager, said there were 17 entries in this year’s contest.

Freeborn County residents were to vote for the picture they thought would best represent the Albert Lea-Freeborn County area. People could either vote online or at the chamber office.

This was the seventh year of the contest.

For winning, Passingham was awarded a gift basket valued at more than $500 with items donated from area businesses.

People can view the contest entries at www.albertlea.org/ornament.htm. Passingham’s photo on the site is No. 17.

The ornaments are for sale for $6.