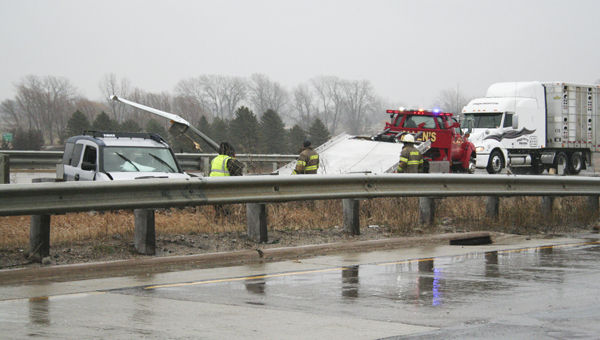 Emergency responders start work on towing a Honda Element that was involved in a crash Wednesday afternoon on Interstate 90 westbound near the Oakland Avenue exit. Three people were involved in the crash. All three were transported to a hospital to check for injuries. Minnesota State Patrol, the Freeborn County Sheriff's Office and the Hayward Fire Department responded. For more information look to AlbertLeaTribune.com and Friday's print edition of the Tribune. -- Adam Harringa/Albert Lea Tribune

Icy roads were most likely to blame in a one-car crash east of Albert Lea Wednesday afternoon.

Shortly after 1 p.m. on Wednesday, the Freeborn County Sheriff’s Office, Hayward Fire Department and Minnesota State Patrol responded to a crash on Interstate 90 east of Hayward.

A 2005 Honda Element was driving westbound on I-90 when it reportedly lost control and took out the guard rail at the median at Oakland Avenue Exit 166.

The driver of the vehicle was Mary Santa Ana, 38, of Bolingbrook, Ill., and received non-life threatening injuries. The two passengers, both of Bolingbrook, Ill., were 1-year-old Cori Havener who had no apparent injuries and John Havener, 38, who received minor injuries, according to the Minnesota State Patrol.

Temperatures were hovering right around the freezing point at the time of the crash, and a wintry mix of precipitation — freezing rain and sleet — were causing slick travel conditions. Snowplows were out in full force, scraping slush and applying salt to slick roadways.