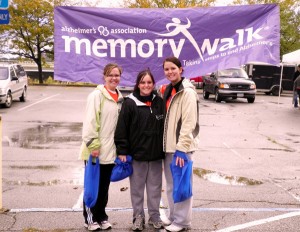 The Alzheimer’s Memory Walk in Des Moines, Iowa, was held on Sept. 25. More than 800 people participated with a total of $121,657 raised. Amanda Weiss raised $365 for her team. The team was in memory of her grandfather Wayne Weiss, who passed away in 2005 from Alzheimer’s. Amanda is the daughter of Keith and Wendy Weiss of Glenville. Her team members were Kristine Yost, daughter of Carl and Carmen Yost of Emmons and Layne Jacobson a friend of Amanda’s. If people are still interested in donating they can go to: http://memorywalk2010.kinera.org/desmoines/memoryofgrandpa or they can contact Amanda directly. Thank you to everyone who donated and helped support the cause of finding a cure for Alzheimer’s, it is greatly appreciated. There are 5.3 million people in America living with Alzheimer’s disease and almost 11 million people providing care. 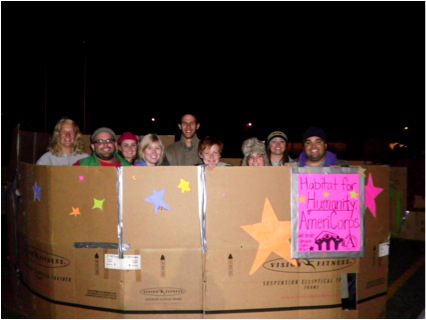 A group poses for a photo at Reggie’s Sleepout.

Reggie’s Sleepout was held Oct. 16 in Des Moines, Iowa, at the Drake Football Field. The event was to raise awareness and money for Youth Homelessness in Iowa. All proceeds benefit Iowa Homeless Youth Centers and the Des Moines Area Religious Council. Iowa Homeless Youth Centers is a community-based program of Youth and Shelter Services Inc. Amanda and her group of Habitat for Humanity Americorps friends, created a cardboard box to sleep in for the night to experience what if would be like to be homeless. More than 1,000 people slept under the stars. Team Habitat for Humanity AmeriCorps raised $400 for the event. The team would like to say thank you to everyone that donated, it is greatly appreciated! If you would like to donate you can contact Amanda or visit: http://reggiessleepout.org/faf/home/default.asp?ievent+337770&lis=1&kntae33770=436A2B5B99D94E38B9C1C8EFE1C870D.

Amanda Weiss is serving a second year as an Americorps VISTA doing a year of service working with Habitat for Humanity in Des Moines, Iowa, as ReStore VISTA working on creating volunteer programs.