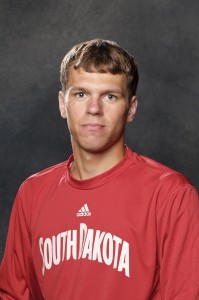 Ethan Marquardt -- Courtesy of the University of South Dakota

Edinburg, Texas for the University of South Dakota Coyotes.

Marquardt —  a 2008 graduate of Albert Lea High School — finished the 8k first for the Coyotes in 24 minutes and 47.13 seconds, and earned All-GWC second team honors. He typically finished fourth for the Coyotes during the regular season.

The Coyotes finished fourth as a team.

This is the second straight season Marquardt was named to the All-GWC second team. Last year, he was honored after placing 13th in the conference championships in 26:55.