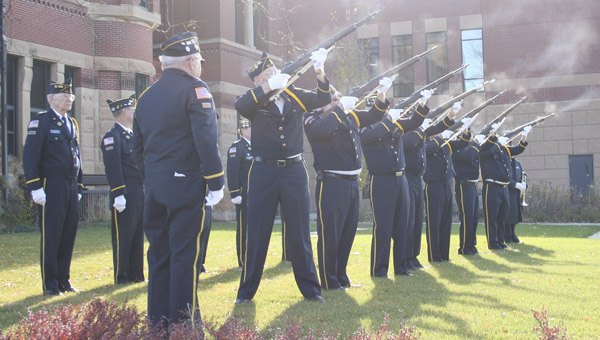 In a “celebrity-obsessed culture,” Sgt. 1st Class Jeff Dahlen wanted to remind people on Veterans Day just who the real stars of America are: soldiers. 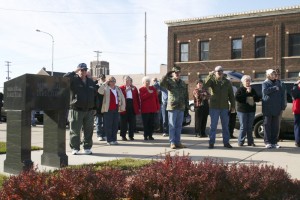 To a packed house at the Freeborn County Courthouse on Thursday morning, Dahlen told stories of stars.

He talked about the late Jack Lucas, who earned a Medal of Honor fighting on Iwo Jima at age 17.

“Although he lied about his age to enlist in the Marine Corps, his family, friends and classmates were awestruck when he enrolled in high school after World War II, already possessing the nation’s highest military decoration,” he said.

He told about Airman Michael J. Buras, a member of an Air Force Explosive Ordnance Disposal Team who “made the supreme sacrifice” on Sept. 21 in Kandahar, Afghanistan. Buras died at the age of 23 from wounds inflicted by an IED, leaving behind a wife and 1-year-old daughter.

“While we are happy to be here today to express our appreciation for our veterans, true appreciation is expressed through deeds, not words,” Dahlen said. 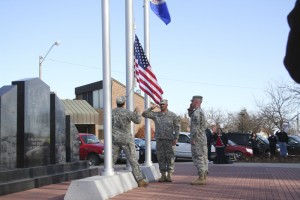 Such deeds, he said, are by remembering veterans in hospital beds when service organizations ask for donations, by reminding lawmakers the cost of being a veteran when members of Congress complain about costs of veterans programs and by encouraging employers to give extra weight to the experience and skills veterans bring to the workforce.

“And don’t underestimate the power of simply saying ‘thank you’ to veterans that you encounter,” Dahlen said.

Dahlen was the main speaker at the annual Veterans Day program Thursday morning in Albert Lea. The program, which drew more than 100 people in the old courtroom of the Freeborn County Courthouse, was presented under the direction of the Freemond Madson Post 447 of the Veterans of Foreign Wars.

Before the program, local veterans were invited to a breakfast at the Leo Carey American Legion Post 56 on Broadway Ave., Albert Lea. About 30 veterans, mostly members of the VFW and American Legion Honor Guards, gathered in uniform to drink coffee, eat rolls and keep old memories alive. 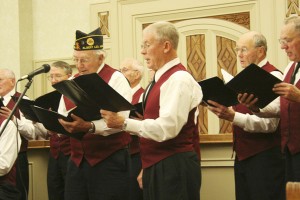 The Careyaires led the crowd of more than 100 people in song at Thursday's Veterans Day Program at the Freeborn County Courthouse. -- Michelle Haacke/Albert Lea Tribune

Even earlier in the day, more local veterans gathered at the Hy-Vee deli for a Veterans Day breakfast. Donald Dowd, who served in the Marine Corps in the late 1950s and 18 1/2 years in the Army National Guard of Albert Lea, enjoys the tradition of these events.

“I’m proud to be a vet and it’s fun to see these people each year,” he said. “It’s like a band of brothers when we go to these breakfasts.”

Some said attendance at the American Legion breakfast was lower than previous years because several veterans were making the rounds at local schools.

Dahlen spoke at Southwest Middle School before attending the American Legion breakfast. He began his speech to the students with 10 seconds of silence.

“In America, it’s not quiet, it’s very busy,” he said. “We must take the time to give respect to veterans, to remember them, and we can do that through silence.” 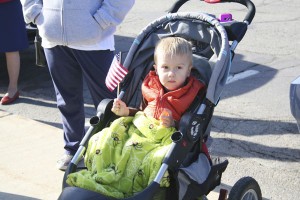 He said that going to the schools is a great way to inspire the students, by pointing out to them freedoms that weren’t always here and the reason for this is because of veterans who fought for this country.

Sandy Maiden of the Freeborn County Women Veterans was at Halverson Elementary School Thursday morning, teaching students about flags: etiquette, history and how to fold flags.

“The kids were very interested,” she said. “One little girl asked if we knew her grandfather. She had never known him, but she knew he served in a war.”

VFW Honor Guard member Dean Allen, a veteran of the Vietnam War and retired elementary school principal, thought it was a good thing that so many veterans were participating in the school programs.

“When I grew up, you learned about patriotism in the schools, at home and in church,” he said. “I just don’t think we instill the same patriotism these days.” 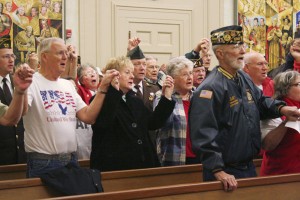 Over 100 people, including veterans and their spouses, held hands and sang “God Bless America” at the Veterans Day Program at the Freeborn County Courthouse Thursday morning. -- Michelle Haacke/Albert Lea Tribune 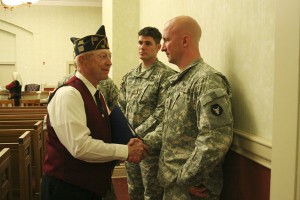