An author generously donated a book for each student and teacher at Halverson Elementary School and raised awareness for his Pennies for Peace campaign Wednesday.

Special education teacher Kathie Lein’s sister is friends with author Greg Mortenson, which is how Lein got in touch with the author. He told Lein he was passionate about schools and spreading the word about his organization. Mortenson then told Lein he’d like to donate books to each student at Halverson.

“He said he’d love to do something for the school,” Lein said.

Pennies for Peace is a nonprofit that was started by Mortenson. He first realized that if students could donate enough pennies, they could raise enough money to help under-funded schools in developing nations throughout the world.

The books Mortenson donated are about a trip he took to Pakistan where he was stranded in a village and the natives took care of him. He wanted to repay them by building a school, which started the Pennies for Peace campaign.

On Wednesday, during a school assembly at Halverson, students were told they’d hear about the books and be able to donate pennies to help the organization, but it was a complete surprise to them that each student would be taking a book home.

“It’s a great thing to be able to give them a book to take home,” Lein said. 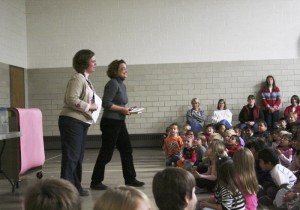 About 260 kindergartners through third-graders took home Mortenson’s children’s picture book “Listen to the Wind.” About 213 fourth- through sixth-graders received the junior novel “Three Cups of Tea,” and staff at Halverson received “Stones into Schools.” All the books have the same story, but are different depending on the age of the person who will read it.

Librarian Staci Waltman spoke to the students and staff at the assembly about the books and Mortenson’s story. She said giving to a good cause can make people feel good, which is why she likes the Pennies for Peace project.

School Principal Matt Esterby said he was excited about the assembly and the fact that it was organized completely by staff members. He said he’s glad teachers and staff embrace literacy and bring programs like this to the school.

Pennies for Peace is a part of the central Asia Institute that provides community-based education and literacy programs in remote mountain regions of central Asia. Since 1996 it has built nearly 100 schools in Afghanistan and Pakistan, which serve more than 28,000 students. More information can be found at www.penniesforpeace.org.