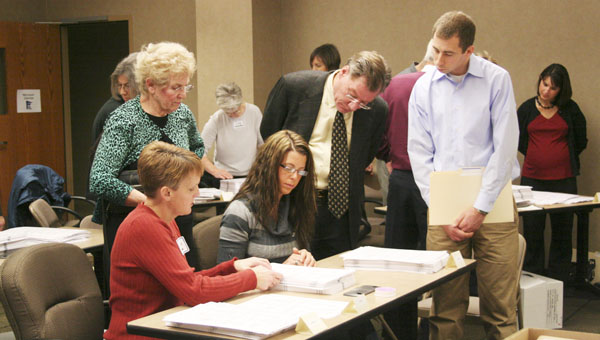 Four missing ballots in Myrtle didn’t have any effect on a 57-vote difference in the District 27A House race, after recounts in both Freeborn and Mower counties were completed Monday morning. 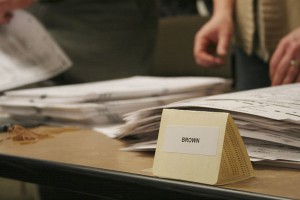 Election judges hand sorted ballots into piles before counting during the recount Monday morning for the House District 27A race between Robin Brown and Rich Murray. -- Michelle Haacke/Albert Lea Tribune

GOP challenger Rich Murray continued to lead incumbent DFLer Robin Brown by 57 votes going into the recount, which began at 9 a.m. Monday in the Freeborn Room at the Freeborn County Courthouse and wrapped up shortly after noon.

Four votes in Myrtle remained unaccounted for at noon, after it was discovered that four ballots cast in Myrtle were missing from the ballot box. According to Freeborn County Deputy Auditor-Treasurer Nicole LaFrance, these ballots were discovered in the bottom of the write-in voting bin in Myrtle shortly thereafter. She said someone from the Auditor-Treasurer’s Office drove to Myrtle, collected the ballots, sealed them and transported them back to the Freeborn County Courthouse by 2:30 p.m. Monday.

“We had the correct totals from the tapes on election night,” LaFrance said. 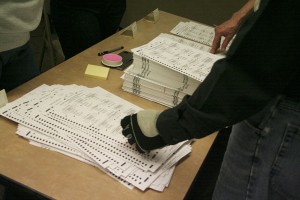 This is not an error that would have been caught during the county’s post-election equipment review on Nov. 10. Only the ballots from two precincts chosen at random, Riceland Township and Geneva, were double-checked at that time.

During the recount, Murray picked up two votes in Albert Lea Ward 4. Brown picked up one vote in Albert Lea Ward 3 and another in London Township. Freeborn County Auditor-Treasurer Dennis Distad said these votes were picked up because ovals had not been filled in properly on the ballots; the voters had used check marks or X’s, which are not been picked up by the optical scanning machines.

None of the votes were challenged.

Mower County Auditor-Treasurer Doug Groh reported there were no vote changes found on the ballots, nor challenges made, during the recount for this race in Mower County.

After the recount, Murray continued to lead Brown by 57 votes. 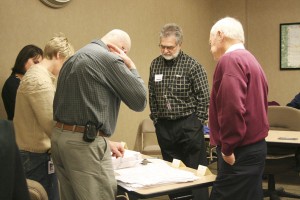 “The fact that Rich Murray has the majority of the votes confirms what was reported,” said Brian Rice, lead representative for the Brown campaign. “We knew it would be very close.”

“It’s tough to lose a race that’s that close, but Robin accepted what the votes were on Nov. 2,” he added.

This was not Rice’s first time being involved in a recount, as he was a part of the close state Senate race recount eight years ago between Grace Stabell Schwab and Dan Sparks. In that recount, he said the vote difference was 33 going into the recount, which narrowed results to just a five-vote difference. 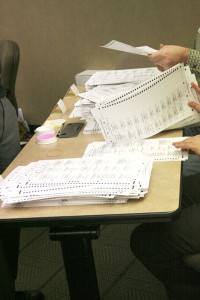 “Eight years ago, Freeborn County did a good job and we found the same thing here,” Rice said. “I think the voters need to know what a highly organized election Dennis Distad runs here.”

“The recount really was a testament to the voting process in Minnesota: open, honest and secure,” agreed Brown.

She said she trusts the recounts and will remain active with her constituents until her term ends.

“I’m continuing to talk to people and still pushing for fair school funding, a strong environment that will be there for our children in the future and continuing conversations with legislators in hopes these continue to move ahead,” Brown said.

She added she’s proud of those who worked with her to run a positive campaign.

Murray, who was out of state on business during the recount Monday, said that he had been proceeding “business as usual,” since the Nov. 2 general elections.

“I’m preparing to work in the state Capitol in January, talking to committee chairs, figuring out what committees are the best for me to serve on and which ones can make the most impact to do good things for District 27A,” he said.

Murray also plans to attend orientation and caucus meetings this Wednesday through Friday in St. Paul.

The House District 27A race recount comprised hand-counting ballots for nine precincts in Mower County and all 40 precincts in Freeborn County, plus absentee ballots.

Six tallying stations, with two election judges each, were set up in the Freeborn Room. 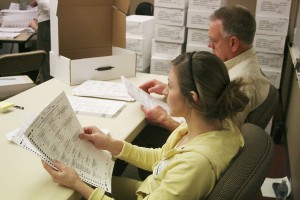 One representative from each campaign was present at each of the stations, acting as observers. Al Arends, co-chairman of the Freeborn County Republican Party, acted as an observer for the Murray campaign. He said he thought this recount “came off very well.”

“Everything was the way the machines counted,” he said. “It’s good to know the machines work right and the precincts are well run by people who volunteer.”

The results from House District 27A and governor recounts in Freeborn and Mower counties have been forwarded to the Secretary of State’s Office.

Recounts in all 87 counties across the state began Monday and will finish by mid-December.

The same election judges from the morning recount, which consisted of county employees and volunteers, hand counted each ballot a second time for the governor’s recount, using the same procedure as they had for the District 27A House race recount. 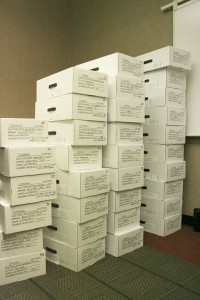 Thousands of ballots were stored in boxes, waiting to be counted by hand, during the recounts in Freeborn County on Monday. -- Michelle Haacke/Albert Lea Tribune

Before any of the counting started, election judges first sorted ballots into piles: one pile for each candidate and another pile labeled “other.”

According to Distad, “other” were ballots with write-in votes or those that weren’t marked for a candidate.

George Rothmeier, an employee with the Freeborn County Assessor’s Office, was paired with volunteer Dee Christianson at one of the tallying stations. They had been through the routine two years ago during the Al Franken-Norm Coleman recount. Rothmeier estimated that the governor’s recount would take longer than the District 27A House recount, because there were more candidates — and more piles of sorting ­— involved.

“With the Brown-Murray recount, we only had two candidates, so it went really fast,” he said. “This will double sorting time with five to seven candidates in the governor’s race.”

Once all of the ballots were sorted, the counting began. The process was repeated for each of the 41 boxes of paper ballots — one for each precinct plus one containing absentee ballots.

“We’re surprised a manual count is so accurate,” Rothmeier said. “Other than two marks we found outside the ovals this morning, our counts have been identical to the machine counts.”

Prior to the start of the House District 27A recount Monday morning, LaFrance and Freeborn County Administrator John Kluever straightened ballots. Kluever said their role was to save time for the election judges during the recount process.

Distad’s role in both recounts was to act as the final authority if there were any questions as to voter intent.