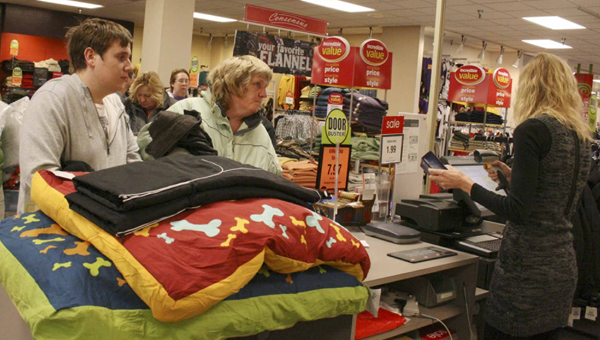 Dean Anderson, left, and his mother, Diane Solberg, braved the crowds this morning at Herberger’s to purchase a digital camera, a coat and some dog beds. Herberger’s doors opened at 3 a.m. -- Sarah Stultz/Albert Lea

Electronics was the name of the game this morning as earlybird shoppers were taking advantage of rock-bottom prices to kick off the holiday shopping season.

Walmart, which was open its regular 24 hours a day on Thanksgiving, kicked off sales on movies, toys, kitchen accessories and other select items at 12:01 a.m. It was the 5 a.m. electronics sales, however, that people were in line for. 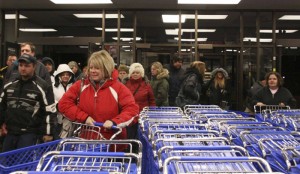 Black Friday shoppers rush through the doors of Shopko at 5 a.m. this morning. There were at least 200 at the store at the time of opening. --Sarah Stultz/Albert Lea Tribune

By 4 a.m., more than 100 people stood in a line that snaked up and down the aisles of the grocery department, waiting to purchase the Emerson 32-inch Class LCD HDTV, on sale for just $198.

With a limited supply in stock, shoppers wanted to make sure they ended up going home with one. Sandy Perez, who was in about the middle of the line, said she took her spot at 3:30 a.m. It was her first time earlybird shopping on Black Friday.

“If it wasn’t for a staff member here, I wouldn’t have known to come this early,” she said.

It was the rock-bottom prices that drew her in. Her husband was in a line nearly as long, in the Lawn & Garden section waiting for a laptop computer. 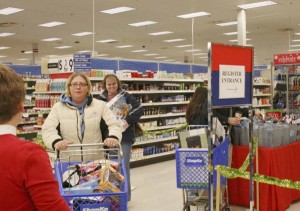 A Shopko employee guides two shoppers around a corner at Shopko to the checkouts around 5:30 a.m. today. -- Sarah Stultz/Albert Lea Tribune

“In this recession and these times, good prices have to come first,” she said.

In fact, Walmart had 17 separate stations set up throughout the store, each station featuring one category of select electronic items. Greeters handed out maps at the doors, to ensure people knew where to go.

Three officers with the Albert Lea police department were also stationed inside Walmart. According to Cpl. Tim Matson, this was the first year officers were stationed inside of the store. He said in the past, local law enforcement has been stationed outside.

He said some shoppers had been in lines for electronics since 11 p.m. Thanksgiving night.

Across town at Herberger’s, electronics, toys and clothing were popular items. More than 50 people waited in line for the 3 a.m. opening. 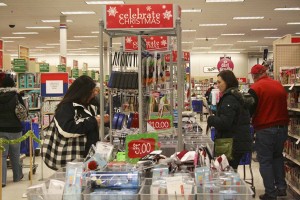 At 3:20 a.m., Janelle Jensen of Clarks Grove had boxes of toys and shoes nearly falling out of her arms as she and her sister-in-law made their way to Herberger’s checkout line.

Jensen said it’s a family tradition to earlybird shop, something she’s enjoyed doing with her mother, sister and sister-in-law for about the past 15 years. Jensen had bypassed going to bed for a Thanksgiving night of shopping that began at 10 p.m.

“I started in Medford and made my way down,” she said.

Her timeline was nearly as detailed as her shopping list: Medford from 10 p.m. until midnight, Owatonna until 2 a.m., Herberger’s in Albert Lea at 3 a.m., then to Walmart by 5 a.m. 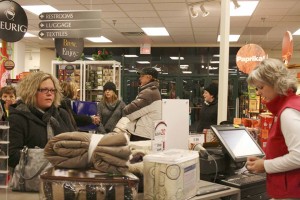 Lisa Buchanan, left, stands behind the counter at Herberger’s with her purchases around 3:30 a.m. today. Buchanan, who was shopping with a friend, said she planned out her Black Friday shopping after her Thanksgiving meal. -- Sarah Stultz/Albert Lea Tribune

Jensen estimated she would be completed with all of her Christmas shopping by mid-morning on Black Friday.

“I was crabbing about how some of these stores were opening earlier and earlier and was worried it may ruin all of the fun, but we’re still up and at ’em and having a great time,” she said.

John and Sari Edwards of Albert Lea had gone to Walmart at midnight to do some toy shopping, but the sale items they planned to buy were already sold out. They decided to brave single-digit wind chills outside for more than an hour to be the first ones in line for Shopko’s 5 a.m. opening.

But they weren’t the only ones. More than 200 people, many who waited in their cars until about 4:55 a.m., poured into Shopko when manager Mike Sailstad unlocked the doors for business. He, too, expected electronics to be the hot item of the morning.

Nick Wilwert of Albert Lea was shopping for his stepdaughter, who has a birthday coming up. He stood in line outside for over an hour to save more than $40 on the GPX 7-inch LCD Portable DVD Player. By 5:04 a.m., he was in the checkout lane.

Jason Saltou of Albert Lea was the first person to check out. After waiting in line only about 12 minutes, he checked out with two Ski-Doo Outer Edge Snow Moto’s at 5:01 a.m. This wasn’t his first time earlybird shopping, and he knew exactly what he needed.

“Normally, we go to Walmart at midnight,” he said.

Saltou, like many others, said it’s all about the great prices. He was heading back to Walmart again when done shopping at Shopko.

Shopko has participated in Black Friday earlybird specials for the past two years. Poles lined with festive red, green and gold garland helped ensure shoppers made their way to the checkout lines in an orderly fashion. Associates stood in front of the checkout lanes and associate Julian Bohonek was pointing shoppers to the quickest line.

“This seems to work smoothly,” she said. “We don’t want any congestion.”

The day after Thanksgiving has long been known as the unofficial kickoff to holiday shopping. In recent years, however, Black Friday has become a frenzy of activity, with rock-bottom prices to entice shoppers into its doors even earlier.

For many retailers, it’s the day of the year where they go from the red, or posting a loss on the books, to the black, or turning a profit. The National Retail Federation expects holiday sales to grow 2.3 percent over 2009.