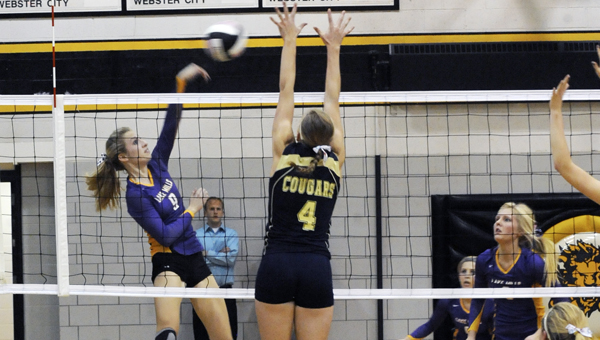 LAKE MILLS, Iowa — The biggest difference between the 43-1 Lake Mills Bulldogs volleyball team and the 26-11 Pella Christian Eagles isn’t wins and losses, but strength of schedule. 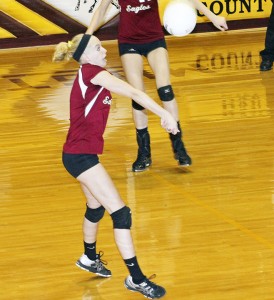 Jasmin Schelhaas, a junior outside hitter, of the Pella Christian Eagles hits a ball earlier this season. -- Kenn Krpan/Pella Chronicle

The two teams meet Thursday in the quarterfinals of the Class 2A state volleyball tournament in Cedar Rapids, Iowa, and how they got there won’t mean much in the single elimination, eight-team tournament.

The Eagles opened the season ranked No. 12 in Class 2A, coming off a 23-15 record last season. The Bulldogs entered the season unranked, despite returning six seniors from last year’s 37-4 squad.

But the Bulldogs slowly climbed into the state rankings, and up to No. 6 in the final list issued Oct. 10. The Eagles finished ranked No. 9.

To advance to the state semifinals, the Bulldogs will have to handle the Eagles’ aggressive serving, and be equally aggressive on offense.

The Eagles outside hitter — 5-foot 10-inch senior Meredith Fopma — is the team’s most active hitter and capable of placing the ball.

According to Boehmer, the Eagles are balanced, efficient and experienced, and their libero — Ashley Van Kooten — is a great passer who is able to run their offense effectively.

The Bulldogs must minimize Van Kooten’s impact on the match in order to win.

Crowd noise will impact the match less in the U.S. Cellular Center than it did in more intimate Lake Mills High School gym in the regional finals on Nov. 2. Momentum will still be key, though, because the match is being player on a larger stage and nerves will be a factor.