Clayton Francis Kearns was born March 25, 1924, in Colorado Springs, Colo., the son of Clifford F. and Sadie (Dahl) Kearns. He attended country school and Austin High School. Clayton was married to Maxine D. Kraushaar on Nov. 30, 1947, at the Trondhjem Lutheran Church, rural Freeborn County. They farmed south of Oakland for 29 years. In retirement the Kearns’ moved to Austin where he was a member of Our Saviors Lutheran Church and the Mower County Senior Center. 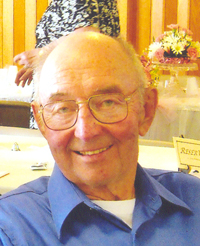 Out in the country, Clayton was called the “Community Ambassador.” He liked to help people, especially his children and grandchildren. He also enjoyed camping, fishing and playing cards.

Clayton was preceded in death by his parents and a grandson.

A memorial service will be held at 11 a.m. Wednesday at Our Saviors Lutheran Church in Austin with the Rev. Dan Kahl officiating. There will be visitation from 10 a.m. until the time of the service at the church on Wednesday morning. In lieu of flowers the family prefers memorials to the Our Saviors Lutheran Building Fund or to the donor’s choice. Clasen-Jordan Mortuary is in charge of arrangements.