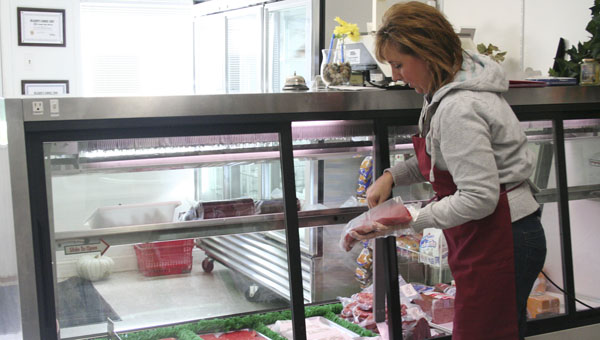 Darcy Johnson stocks the counter at Conger Meat Market in Conger. They also have a branch at Northbridge Mall in Albert Lea. -- Michelle Haacke/Albert Lea Tribune

“All of the corn is out in the fields, so I think compared to last year, we’ll be even busier,” Darcy said. “Last year, there was still corn in the fields so the deer were harder to see.”

This is exactly why the Johnsons are increasing their hours over the next couple of weekends. This Saturday and next, Nov. 6 and Nov. 13, Conger Meat Market will extend its hours until 6 p.m. Jeremy will also be in the market on both Sundays, Nov. 7 and Nov. 14, to take in deer.

They are also ramping up their staff. Darcy said they typically employ 20 people at the Conger and Northbridge Mall locations combined. During deer season, however, they will run a second shift at the locker with four to 10 people, as well.

According to Darcy, Conger Meat Market is especially popular during deer season for one reason in particular.

“We’re one of the few places that still makes dry venison and jerky products,” she said. “Those are very time consuming and a lot of times, lockers are just too busy to do it.”

But deer season is just the beginning. Darcy said the locker will be busy now throughout the end of the year with the holidays coming up.

“It starts next week with deer, and then Thanksgiving is just around the corner,” she said, reminding everyone that they carry only fresh turkeys.

After Thanksgiving, the holiday orders begin. Gift cards, available in any amounts, have been very popular, as are the made-to-order gift boxes and meat and cheese trays.

“We start a second shift one week before the holidays just for the the meat and cheese trays,” Darcy said.

Other specialty meats Conger Meat Market is known for during the holidays, and year-round, are Korbert hams, oysters, lutefisk and prime rib, which is always fresh and cut to order.

“Our meat is always fresh, never frozen and we always buy choice or better,” she added.

Darcy said that anyone wishing to order custom beef or pork for the holidays should place these orders immediately, to ensure it is ready for the Christmas holiday.

To better serve their patrons in Freeborn County and beyond, the Conger Meat Market kiosk at Northbridge Mall serves as an order and pick-up store during the holidays, as well.

The Conger Meat Market was started by Ray and Mabel Bohonek on May 1, 1935.

The Johnsons purchased the market in 2004 and continue to serve southern Minnesota and northern Iowa with Ray’s original Czechoslovakia recipes, full line of Choice meats and small town customer service.