After a last-minute vote change by one councilor, the Albert Lea City Council voted 3-2 Monday to approve the city’s first-ever bike lanes — on Front Street from U.S. Highway 69 to Frank Avenue, where the route would connect to the Blazing Star Trail. 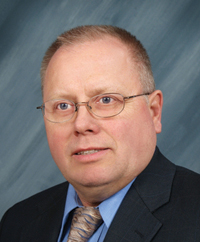 The vote came down to 5th Ward Councilor Larry Anderson, who when asked for his decision changed his mind in the affirmative to allow the project to move forward.

This was the second time the vote came before the council.

Anderson said his vote came “for the greater good of our community” and noted he was swayed when supporters of the project began to talk about their plans to educate drivers, bikers and students about biking safety prior to the installation of the lanes. He called this a key part of the project.

The idea of bike lanes is also supported in the city’s comprehensive plan, and Anderson said he was impressed with the collaboration that took place to make the project a reality.

He was concerned initially with the limited parking on Front Street in front of a few businesses and residences, he said.

The project is estimated to cost around $39,000 for the initial construction, including signs, and between $15,000 and $20,000 in annual maintenance costs.

All but $4,000 of the initial costs will be covered in grants from SHIP, Pioneering Healthier Communities and Albert Lea Medical Center.

In addition to the support from these groups, the Albert Lea school board directed Superintendent Mike Funk to write a letter to the council, which ultimately stated it also looked favorably on the project.

The letter stated bike lanes would make it safer for the district’s students to ride to and from school and it approved having parking only on the south side to allow students to be picked up. Parking would be allowed right next to the curb, with the bike lane on the outside.

Albert Lea-Freeborn County Chamber of Commerce Executive Director Randy Kehr also spoke of a conversation he had with Kwik Trip representatives. They emphasized that though eliminated parking in front of their business on Front Street might be an issue, they would work around it.

Kehr said the company has a strong wellness program and did not want to be the reason the lanes didn’t get approved.

Almost a dozen people from other entities spoke in favor of the lanes during the public hearing at the beginning of the meeting. No one spoke against the project.

Albert Lean Scott Martin, owner of Martin’s Cycling & Fitness, said he hopes Albert Lea can become one of the top bike-fiendly cities in the state and nation.

Dennis Dieser, co-coach for PHC and executive director at the Albert Lea Family Y, said he feels the bike lanes are a step in the right direction toward creating change.

Albert Lea Convention and Visitors Bureau Executive Director Susie Petersen talked about the economic and tourism benefits that come from bike lanes and trails. She said she hopes Albert Lea can become a true recreational community and destination.

Supporters noted they hope this is just the first of several bike lanes in the community.

The project will be constructed in the spring.

According to the project, parking will be affected in the following ways:

Look to the Tribune Wednesday for more about the Monday City Council meeting.