Crows talking and arguing in the trees

“Everything is nearly copacetic. Although as I slide down the banister of life, I do give myself a wedgie. I got a new job. I’m the groundskeeper at the coffee shop. It doesn’t pay much but every cent counts. I’m a big believer in the old adage, ‘See a penny, pick it up, and all that day you’ll have a penny.’ It’s a shame that a man like me has to work at all. I’d make a perfect billionaire’s son. I was visiting a relative in Minneapolis yesterday when a guy asked me what day it was.”

“I’ll bet you answered him with a question. You do that often,” I say.

“Do I? How was I supposed to know what day it was? I told him that I was just a visitor and that he should ask a local. He looked at me funny. Speaking of looking, look at this. See if you can read this.”

“Why don’t you get some eyeglasses?” I inquire.

“Why would I need glasses? My eyesight is so good that I have no trouble seeing in the dark.”

“Then why do I see you using a flashlight?” I ask.

“The only reason I use a flashlight is to keep things from bumping into me.”

The eye of a storm

The year had hit us with hailstorms, tornadoes and floods. Then it surprised us with a land hurricane. A plummeting barometric pressure led to winds stronger than those produced by campaigners for public office. The weather has become more alarming since we started speaking of weather events. I placed rocks in my pockets to keep from being blown away. The heavy winds caused my house to cry out in the night. I interpreted the sounds as my house calling, “Uncle! Uncle!”

As I drove down the road, the radio voice told me that there was an eye to the storm and it was located near Duluth. As I continued on the Bath Road, I entered another kind of an eye. It was the eye of a blackbird storm. A flock of endless blackbirds surrounded my car. They swirled about me as if they were auditioning for roles in Hitchcock’s movie, “The Birds.”

I watched the birds as they read the earth in a way I could only imagine. The birds were foraging, attempting to find a decent breakfast.

They were close enough to bless me. 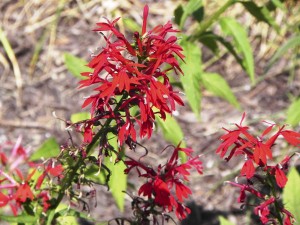 Photo of a cardinal flower by Al Batt.

Something to crow about

The sun promised a good day. I could hear the crows talking in the treetops. They argued and laughed.

The morning was going as most do — much too quickly. I took a chicken from his roost and set him on the ground. He crows constantly from the beam he spends nights on. His crows are good but he ends them in a pitiful wheeze. I used a rake, placing it gently under him so that he would step on it. It was an elevator to the ground floor for this less than nimble rooster. Sometimes the process was like turning a cruise ship around as the loosely put together bird stumbled over the lawn implement. On the ground, he clucked his appreciation at my small kindness. It’s a lot to go through for a rooster, but I don’t mind. Folks say, “It’s just a chicken.”

I don’t think any creature is a “just a.” Helping the rooster gave my day an ordinary splendor.

Once the rooster’s feet were firmly planted on terra firma, he began to make those odd sounds that indicated a flying predator was near. I told the rooster that it was just a crow or two, but he continued vocalizing. A red-tailed hawk flew overhead.

The rooster looked at me and crowed — there was no trailing wheeze.

“Why do woodpeckers hammer on my house?” One reason is for food. Grooved plywood siding exposes horizontal gaps that insects such as leaf-cutter bees crawl into to overwinter, pupate or for safety. Woodpeckers searching for the insects create horizontal rows of holes in the siding. A second reason is to express territory or attract a mate. Homes with aluminum siding, trim boards or fascia boards on any wood, brick, and stucco homes, metal downspouts, gutters, TV antenna towers, chimneys and vents are perfect instruments for drumming. Drumming is typically more annoying than damaging. The third purpose is for habitat. Roosting and nesting holes are usually excavated in houses that are close to wooded areas, have natural wood or a dark-colored stain, and have clapboard siding, board-and-batten siding, tongue-and-groove siding, or shakes and shingles. Woodpeckers are drawn to redwood and cedar wood more than to composite wood or Masonite. Nesting holes are generally built at the onset of the breeding season (late April and May). Roosting sites are built in late summer and fall in preparation for winter.

“Does the lack of acorns mean a mild winter?” Squirrels may be aching for the taste of an acorn this winter, but there is no scientific support for a lack of acorns foretelling a mild winter. Mast crops are cyclical. Acorn production is a reflection of conditions in the past rather than a forecast of weather patterns. The weather conditions when the oaks flower in the spring are significant. Oak flowers are wind-pollinated. Warm and dry conditions foster that process while cool and wet conditions have the opposite effect.

A red knot flew nearly 5,000 miles in six days. It flew across the Amazon and the Atlantic Ocean between southern Brazil and North Carolina.

A raindrop that falls into Lake Itasca arrives at the Gulf of Mexico in about 90 days. Approximately 25 percent of the fish species in North America can be found in the Mississippi River.

“If the sight of the blue skies fills you with joy, if a blade of grass springing up in the fields has power to move you, if the simple things of nature have a message that you understand, rejoice, for your soul is alive.” — Eleonora Duse

“What was hard to bear is sweet to remember.” — Portuguese proverb

Al Batt of Hartland is a member of the Albert Lea Audubon Society.