Downy variety is most common woodpecker

“Everything is nearly copacetic. I’m on a diet. When someone hollers, ‘Come and get it’ my plate is so small, I can’t find it. I’ve been working on my car. It shakes and rattles, but it doesn’t roll. I cleaned the inside of it and now I get 10 miles more per gallon. Come on over tomorrow night. I’m going to serve some of my almost world famous blistering chili. You know, if the president ever came to my house, I’d serve him some of that chili.”

“Why would the president visit your hovel?” I say.

“Why, to eat my almost world famous blistering chili, of course. I just got a complete physical from Doc Splint Eastwood, including something called a visual acuity test. The old quack had me look at an eye chart and told me to cover my right eye and read as far down as I could on the chart. I was amazing. Superman would have been envious of my vision. Then Splint told me to cover my left eye and read as much of the letters as I could. I couldn’t see a thing.”

“No, how do you expect someone to read anything with both eyes covered?”

The brown-headed cowbird lays its eggs in the nest of another bird species. The foster parents raise the young cowbirds that do not imprint. Imprinting is a rapid learning process by which a bird hatches and establishes a behavior pattern of recognition and attraction to another of its own kind or to a substitute or an object identified as the parent. It fixes its attention on the first object with which it has visual, auditory or tactile experience. When recently hatched birds such as ducklings are hand reared, they prefer the company of their human keeper to that of their own species. Some have referred to the cowbird as the “passerine chicken” in that the females lay approximately 40 eggs per year during a two-month nesting period. A passerine refers to the largest order of birds, which includes more than half of all living birds and consists chiefly of altricial songbirds with perching habits. Altricial describes birds that hatch into a helpless condition that requires care for some time. Some birds are precocial. That means the newly hatched creatures are capable of a high degree of independent activity. Ducklings are a prime example.

“Why doesn’t a woodpecker’s bill wear down after the pounding it takes?” It does wear, but it has a horny sheath that grows rapidly with wear. This keeps the pointed bill sharp, strong and resilient, while causing it to be sharpened with every blow. The woodpecker’s bill is reinforced to withstand repeated impacts as the bird hammers on tree trunks. To help withstand the bill strikes, woodpeckers have larger neck and shoulder muscles compared with most other birds. The brain of the woodpecker is small compared to body size, which distributes the impact over a larger area. The brain case is reinforced and the muscles at the base of the bill contract just before impact and absorb the hammering. The woodpecker is built to do what it does.

“I have ants in my house. Will they disappear when winter hits?” I will give you a definite maybe. If they are nesting in a warm area, they could remain active all winter. Generally, baiting is the best way to control ants.

According to the Smithsonian Migratory Bird Center, a blackpoll warbler would get 720,000 miles to the gallon if it were burning gasoline instead of reserves of body fat.

The ruby-throated hummingbird, weighing about as much as a penny, makes a 600-mile, 24-hour nonstop flight across the Gulf of Mexico.

Parrots have the largest brains of any bird relative to their body size.

The male short-eared owl’s territorial song is a pulsing “voo-hoo-hoo,” similar to the sound of an old steam engine. 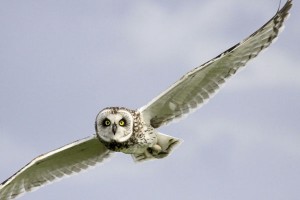 A 1984 Pennsylvania study found that deer could survive a month with no food.

The dark-eyed junco is sometimes called the “snowbird.” It has a charcoal gray body, white belly, white outer tail feathers and a light-colored bill. It presents the gray clouds of winter above and snow below.

Birding is a passion of mine, and my wife has always been impressed by my ability to identify each species solely by its song. To help her learn a bit about birds, I bought a clock that makes the sound of a different bird each hour. We were relaxing in our yard when a blue jay started calling.

“What’s that?” I asked her, hoping the bird clock had been a learning experience.

“The tulip and the butterfly, Appear in gayer coats than I: Let me be dressed fine as I will, Flies, worms, and flowers exceed me still.” — Isaac Watts.

“Although there may be nothing new under the sun, what is old is new to us and so rich and astonishing that we never tire of it. If we do tire of it, if we lose our curiosity, we have lost something of infinite value, because to a high degree it is curiosity that gives meaning and savor to life.” — Robertson Davies.