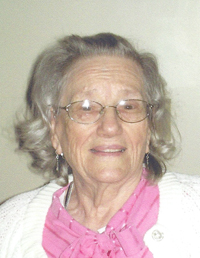 Eileen Habben, 89, of Albert Lea, formerly of Buffalo Lake, passed away Sunday, Nov. 14, 2010, at the Just Like Home Place in Albert Lea. Funeral services will be Thursday at 11 a.m. at the Zion United Methodist Church in Buffalo Lake. Interment will be in the Buffalo Lake City Cemetery. The Rev. Don Malinsky is officiating. Visitation will be Wednesday from 4 to 7 p.m. at the Hughes Funeral Home in Stewart, and will continue for one hour prior to the service at the church on Thursday. Memorial gifts will be given to the Just Like Home Place.

Eileen Emily (Kaiser) Habben was born March 19, 1921, in Albert Lea, the daughter of Roy and Emma (Lage) Kaiser. She was baptized and confirmed in the Lutheran faith. On Nov. 17, 1944, she was united in marriage to Herbert Habben in Palmer, Iowa. They were married for 46 years in which they were blessed with eight children: Elva Marie, Arlo, Darvin, Harlin, LaVonn, Judy, Ronda and Pamela.

Eileen and Herbert moved from Iowa to Minnesota in 1950, where they farmed in the Waldorf area prior to moving to the Buffalo Lake area in 1968.  Eileen worked at the Buffalo Lake Nursing Home for nine years, where she enjoyed the challenges of working with the elderly. Eileen moved to Albert Lea in August 2010 into assisted living at Just Like Home Place. She loved flower gardening, sewing, watching the Twins and her soaps “Young and the Restless” and “The Bold and the Beautiful,” playing cards and dominos. Above all she enjoyed and looked forward to spending time with her “kids,” grandchildren and great- grandchildren. Such times included birthdays, holidays and Sunday morning coffee around the kitchen table. When called upon by her children, Eileen was a tremendous help, and a great role model to her grandchildren. “Grams” is attributed to instilling great family values and morals for the generations to come.