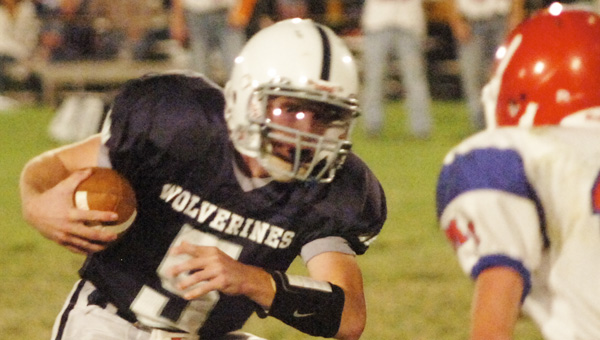 Glenville-Emmons quarterback Zack Williamson runs with the football during a game earlier this season. G-E is on the verge on their first state tourney berth in school history. -- Jon Theuer

GLENVILLE — Playing in their first section championship game, the Glenville-Emmons football team is one of the last 16 Nine-Man team in the state playing on Friday.

Despite their youth, having a first-year head coach in Ryan Kelly and losing four of five games to finish the regular season, the resurgent Wolverines now have a community on its heels.

“(They’re) elated right now,” Kelly said. “There are smiles everywhere, and the energy is crazy.”

To be in position for the school’s first state tournament berth, the Wolverines upset the section’s No. 4 seed Houston on Oct. 29 and No. 1 seed Grand Meadow on Saturday. The Wolverines went 0-3 against the two teams during the regular season, losing by an average of 20 points per contest.

But the Wolverines, who are winning at the right time, now run into a Lanesboro Burros team that hasn’t lost since Sept. 10, and despite being the No. 3 seed, are arguably the best team in the section.

“They are a big, physical football team who is good at getting the ball in the hands of their athletes,” Kelly said, of Lanesboro. “They basically say, ‘here it comes, now stop it.’”

Lanesboro’s route to the Section 1 Nine-Man football game went through Mabel-Canton and Spring Grove — two teams that beat the Burros by a combined 38 points during the regular season.

Spring Grove routed Lanesboro 27-6 during the regular season but the rematch wasn’t even close.

“Both teams are playing their best football right now,” Kelly said. “Our team is much more confident than we were (early) in the season, but I think Lanesboro is as well.”

The section final kicks off at 7 p.m. tonight in Lanesboro. Regardless of the outcome, the Wolverines community is just enjoying the ride.

“The school and community is so proud of these boys as they should be,” Kelly said. “I think the team has been a little surprised at the response and excitement of the community, but it’s been fantastic so far.”