Fern Isabelle Steffen, 64, of Kiester, died Sunday, Nov. 7, 2010, at Parkview Care Center in Wells. Funeral Services will be held Friday at 10:30 a.m. at Our Savior’s Lutheran Church in Kiester. Visitation will be Thursday from 5 to 8 p.m. at Bruss-Heitner Funeral Home in Wells and will continue one hour prior to the service at the church on Friday. The Rev. John Malm will officiate, and burial will be in Walnut Grove Cemetery, Walnut Grove, Redwood Co. Bruss-Heitner Funeral Home is assisting the family with arrangements. 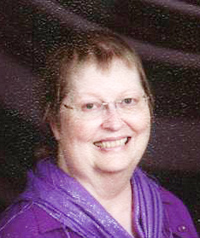 Fern took pride in being named after her father’s mother Fern Isabelle (Brugger) Enright who had died from complications of pneumonia a few days after giving birth to a baby girl.

Fern graduated from Austin High School in June of 1964 and went on to the Lutheran Bible Institute in Golden Valley, graduating in June of 1966 with a Parish Worker’s Certificate.

In June of 1973 Fern married David Martin Paulson. They were blessed with one son, Theodore Martin Paulson, born in Sioux Falls, S.D., in 1977. In 1982 they were divorced but remained amicable to one another.

On a wonderful day Nov. 8, 1986, Fern married Richard Lee Steffen at Calvary Lutheran Church in Rapid City, S.D. She and her son Ted then moved to Storla, S.D., where Richard served two Lutheran Churches as pastor. Richard has three children from his previous marriage, Craig, Virginia and David and they also were a part of their wedding ceremony.

After Fern’s marriage to Richard she went back to college and got a Bachelor of Arts degree from Augustana College in 1993 majoring in early childhood and elementary education, minoring in epecial education. Fern was on the Dean’s list and worked hard for her degree.

Fern worked for Headstart in a number of places through the years, as a preschool teacher. She loved working with young children. Fern would sometimes say, “I get to see their eyes light up when they explore and learn new things and I get paid for this, wow!” The self-esteem of each child was important to her.

Fern loved her family and friends. She felt very blessed as a wife, mother and grandmother. Her family was all precious in her eyes. Fern valued her sense of humor; she felt laughter was good medicine. She never felt abandoned by God, her faith was important to her. She felt life was a gift, and she felt very blessed in spite of her breast cancer.

Fern is survived by many relatives and friends. She was preceded in death by her parents, Jake and Betty Enright of Austin; in-laws: Alfred and Helene Steffen of Lamberton; and sister-in-law, Betty (Steffen) Augst of Columbia, Mo.