G-E students get in the holiday spirit 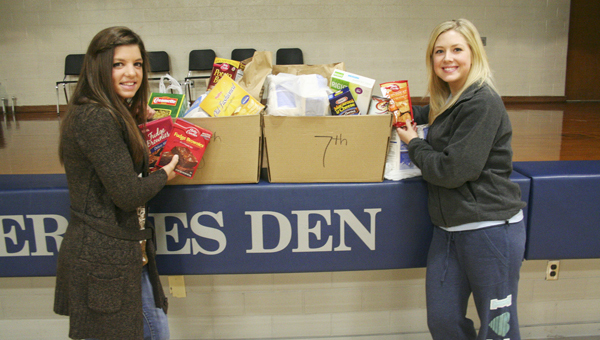 GLENVILLE — Students at Glenville-Emmons High School have been getting in the holiday spirit for the past couple of weeks now.

It started with a food drive on Nov. 11.

According to student council advisor, Stephanie Roedel, each class, which includes seventh grade through seniors, were challenged to gather 60 pounds of food. A weigh-in on Monday will let each class know how close it is to meeting its goal.

For each class that meets or exceeds 60 pounds, each student in that class will get to go to a free movie. This means a day off from school in the spring.

The class whose wares weigh the most also get an additional prize, which Roedel said in the past have included T-shirts, ice cream sundaes or pizza lunches.

“It’s not that tough if you think about it,” said senior Kailey Davis, student council president. “If you have 30 kids in a class, that’s only two pounds per person.”

She said in the past, several classes have gathered 100 pounds of food or more, just to make sure they have enough to attend the free movie day.

But it’s not all about the prizes.

“It’s important to give back,” said senior Alayna Hall, student council vice president. “There are a lot of kids with no presents at Christmastime and a lot of people who depend on the food shelf.”

Starting Nov. 30, the high school’s first toy drive will begin. It’s a tradition that’s been going strong in the elementary school for several years and this year, the high school decided to become involved.

The high school, as a whole, must gather 60 toys or children’s gifts, which will be donated to the Salvation Army.

Davis and Hall pointed out that they don’t just do fundraisers during the holidays, but year-round. Other fundraising and community service events have included collecting beanie babies for soldiers, writing letters to soldiers in Iraq, blood drives, and Pennies for Patients.

“In such a fast-paced society, people forget what they do have, so it’s good to show them that there is need out there,” said Hall.

“Too many kids complain about having too much homework, so we hope to show them there are bigger problems out there,” agreed Davis.