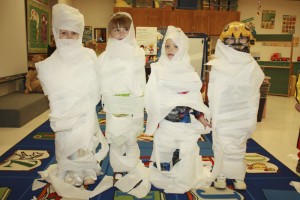 From left to right are Chelsea Anderson, Kaci Wallin, Mitchell Baseman and Jak Heinzeroth dressed up as mummies during the preschool’s Halloween party. -- Submitted photos

The preschool classroom was able to receive a smartboard this year for their classroom. Many classrooms in the school district are equipped with this technology thanks to an E2T2 grant the district received.

The Glenville-Emmons Preschool did a special lesson inside and outside their classroom. The students learned about different aspects of the season fall. At the end of the week, they did a nature walk in their park to find different items. When they completed finding all the items from their page, the students went back into their classroom. They then went to their smartboard in their classroom, where teacher Megan Flatness had the items that they were looking for displayed on the board. The students were then asked to go up to the smartboard to circle the items that were found in the park.

The Glenville-Emmons Preschool is lucky to have a smartboard in their classroom. The students are excited to use their smartboard every day in the classroom. Every day that the students come into the classroom they do their milk count. Also, they work on one letter a week. During that week, they do activities that pertain to that letter. Letter activities include learning the letter (upper and lower), letter sound, pictures that start with that letter, letter games and special videos about each letter.

Preschoolers had a good time learning about fire safety. They got to ride on a fire truck and first responder vehicle. Some kids were carried by firefighters, which they may need to do if there were a fire. This was to teach the kids not to be afraid of firefighters.

Preschoolers at Glenville-Emmons had Halloween parties on Oct. 28 and 29. One of the activities was to see who could wrap themselves the fastest with toilet paper to look like mummies. 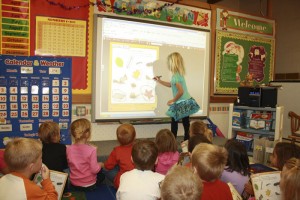 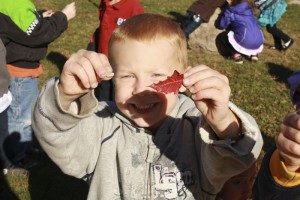 Henry Hershey, 4, found a read leaf and rock on the preschool’s nature walk. 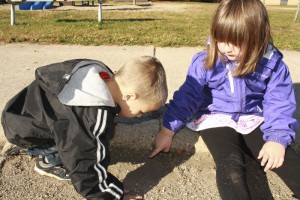 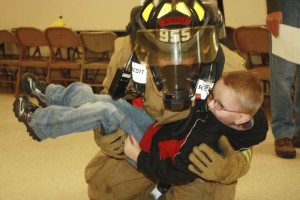 Logan Ladwig being carried by his dad, a firefighter. 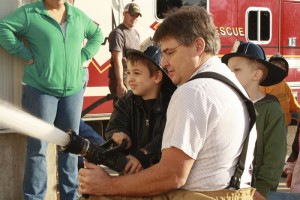 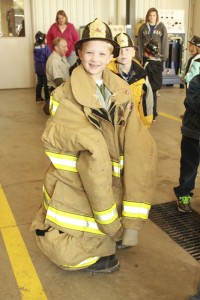 Hunter Adams is shown dressed up in full firefighters’ gear.