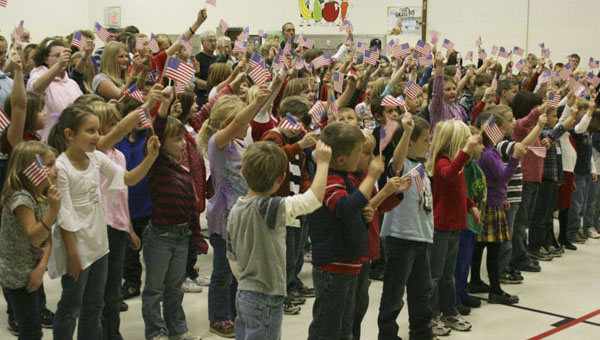 Students at Glenville-Emmons Elementary School wave flags during the song “You’re a Grand Old Flag” Thursday morning. The elementary school and high school each had a Veterans Day program for students and the public. -- Kelli Lageson/Albert Lea Tribune

GLENVILLE — Citizens young and old gathered to show their appreciation for veterans on Thursday morning at Glenville-Emmons Elementary School.

There were two programs in Glenville Thursday, one at the elementary school and one at the high school. The public was invited to both events to be a part of the Veterans Day program at the schools.

“We’re grateful in south and east Minnesota that veterans are recognized universally for what they have done and what they’re doing at the moment,” Laverne Walheim said.

Walheim was the guest speaker on Thursday. He is an officer with the Glenville American Legion and also a member of the Emmons American Legion. He told the crowd it was a pleasure to come and speak to the schools.

“Veterans Day is a time to honor all the outstanding men and women who have served,” Walheim said.

He said that though not all veterans had been to war they all share an oath, which he explained to the young students is a promise. He also talked about how war can change those who serve, and that it’s important to support them when they return home. He then spoke about the importance of supporting women in the military.

“Women are major contributors to our military,” Walheim said.

He also said that America is involved in two wars currently and expressed his disappointment that some people act as if nothing is going on. He said many people don’t understand the sacrifices that soldiers make every day. 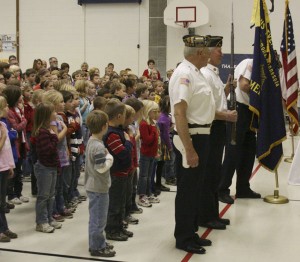 “Showing our appreciation is the least we can do,” Walheim said.

He then mentioned many ways people can be involved and help veterans, like volunteering at a Veterans Affairs hospital.

“There’s no shortage of opportunities to assist those who served our country,” Walheim said.

More than 60 adults came to the program, and about 180 students were there as well. G-E Superintendent Jerry Reshetar welcomed everyone to the program and thanked the veterans in the crowd for their service.

“Students need to understand they’re the ones who protect your freedom,” Reshetar said.

The Pledge of Allegiance was recited, the national anthem was sung and the elementary band performed “America” and “Yankee Doodle.” Students then sang two other songs, and the crowd joined in to sing “You’re a Grand Old Flag.”