Grandma Moses has nothing on my grandma

I was 10 before I realized not everyone’s home was filled with oil paintings. Not everyone’s grandma appeared at 5 o’clock in the afternoon, paint on her hands and face, requesting a glass of wine.

Gertie, my grandmother, lived with my parents long before I was born, and it seemed normal to me. I was always surprised when I’d ask a playmate, “Where’s your grandma?” and she’d answer, “Detroit.” 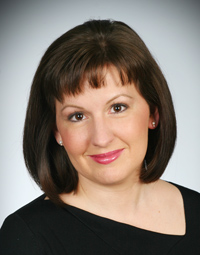 My playroom was adjacent to Gertie’s painting area. Every day, clutching my Raggedy Ann doll to my chest, I laid on the floor to watch as horses changed from pencil sketches to heaving, twitching forces of nature. Landscapes turned bucolic and so inviting I wanted to crawl inside them. Her steady hand fashioned the fine lines of 18th century sailing ships and arrested the chaotic rush of the ocean.

If Gertie liked a famous work of art she wouldn’t buy a print, she’d paint it herself. As a baby, I was drawn to Breton’s “Song of the Lark” hanging in my parents’ bedroom thanks to Gertie. I’d look at my blond, blue-eyed mother with suspicion, then point to the dark haired, dark eyed young woman in the painting and yell, “Ma-ma!”

Millet’s, “The Gleaners” hangs in our dining room. I always thought those French peasants were my sisters doing yard work. The egocentricity of childhood led me to believe that every painting was a snapshot of my family. Art for art’s sake hadn’t occurred to me so much as art for my sake had.

Gertie started painting in her 60s using house paints and wooden boards, but it wasn’t until the day my grandfather died that an artist was born. She painted through the night and in the morning a mighty ship struggling in stormy seas threatened to explode from her canvas. She painted a vessel for her grief. After that night she never stopped.

It was a passion discovered late in life, after she raised a family, became a widow and surrendered most of her independence. Born as the Victorians were making their exit, she never drove, never had a career, and never wore pants! None of this seemed to matter to her. Her dedication to the craft so long laid dormant was like none I’ve ever known. She didn’t work in stops and starts or wait for inspiration to find her. She labored every day and never allowed complacency, that bedfellow of self-proclaimed perfection, to seize her. Always, she found ways to be better and to grow. 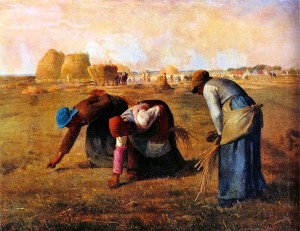 “The Gleaners” by Jean-Francois Millet, 1857

The only serious portrait she ever attempted was of my father. She couldn’t capture his black-eyed stare until one day he came home grumbling and glaring over something. Gertie ran to him, paint dripping from the brush she still held in her hand, hoping to catch his dark look before the mood faded. There it was, the gaze that would transform her portrait’s eyes from vacant to knowing.

I don’t know why she chose my father as her only subject. Perhaps it was her way of thanking her son-in-law for accepting her into his home without question. She lived with my parents for more than 30 years, and my dad never had an unkind word for her except for when she left the stove on all day with an empty pan on the burner. It was only a small fire, but it was enough to rile my father into saying, “Why don’t you paint a picture of this place, Gertie, so we can remember it after you burn it down!”

She painted a picture of our house, and I always thought she should have included a few subtle flames peaking from the windows just to, as Gertie would say, “get his goat.”

In her 90s she reinvented her style and began painting rustic pictures of animals native to our Midwest forests. I call this her “Crazy-eyed-fox period” because some of them look like they’d rather rip you apart and store the pieces in the freezer than hang on the wall of your camp. Aesthetically, they don’t rank among my favorites, but I love them because they are the evidence of a woman, who, at 90, woke up one morning and decided to try something new.

There is a song from the musical “Sunday in the Park with George” about the painter, George Seurat, called “Finishing the Hat.” I listen to it and think of Gertie.

I used to laugh when I’d find Gertie standing in the living room taking a brush to a painting that had hung there for decades. She’d rarely respond when I’d exclaim, “Gertie, no! It’s perfect!”

Now I understand. Paintings were her life and they were alive as long as they were unfinished. As long as she was “finishing the hat” her small and sheltered world was gloriously and magnificently alive. She painted until she died. Her paintings still hang in my parents’ home. All of them remain unfinished.

If you want to read more about art and artists, check out the latest Southern Minnesota Magazine: The Art Issue!

St. Paul resident Alexandra Kloster appears on two Fridays a month. She may be reached at alikloster@yahoo.com and her blog is Radishes at Dawn at alexandrakloster.com.